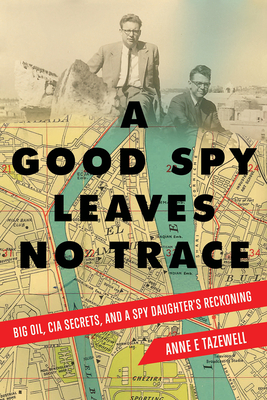 A Good Spy Leaves No Trace is part ghost story, part secret political history, part call to action, and part family memoir. It is an investigation of loss, love, oil, and the alternatives, a story both personal and political. At its heart, A Good Spy is a multigenerational account about family. It is about using the alchemical power of family and forgiveness to heal.

Anne E. Tazewell is an award-winning advocate for the environment and adventure lover. A married mother of three, Anne has imported handicrafts from South America and Southeast Asia, opened a vegetarian restaurant in Virginia, been a textile artist in Key West, Florida, and for the past twenty plus years—seventeen at NC State University—has served as a clean energy expert. She has an MFA in Creative Nonfiction from Goucher College and lives in Carrboro: www.annetazewell.com.

Mission Impossible meets Eat, Pray, Love. This is a riveting, powerfully written espionage thriller with a deeply personal journey into the shadowlands of the human heart. Tazewell masterfully weaves together a search for her father’s spy secrets with her own buried truths. It is a stunning, revelatory read.

Will Harlan, author of the New York Times bestselling biography Untamed: The Wildest Woman in America

Anne Tazewell has written an evocative memoir about her quest to unmask the life of her elusive father, a CIA officer who operated in the Middle East in the 1950s and 60s. It is an important spy story, charmingly told, and along the way readers will bump into a colorful cast of spooks, including Miles Copeland, Kim Philby, and Kermit and Archie Roosevelt. A captivating story.

Kai Bird is a Pulitzer Prize winning historian, Director of the Leon Levy Center for Biography and the author of The Good Spy: The Life and Death of Robert Ames, Crossing Mandelbaum Gate, and most recently The Outlier: The Unfinished Presidency of Jimmy Carter

A Good Spy tells a fascinating story of the author’s journey to confront the facts around her mysterious CIA agent father—and at the same time shed light on her own shadow. A dedicated environmental, anti-war, anti-fossil fuels activist daughter of a military-industrial-complex, oil company mercenary soldier, she weaves a tale that is a microcosm for the dualities that confront our world today.