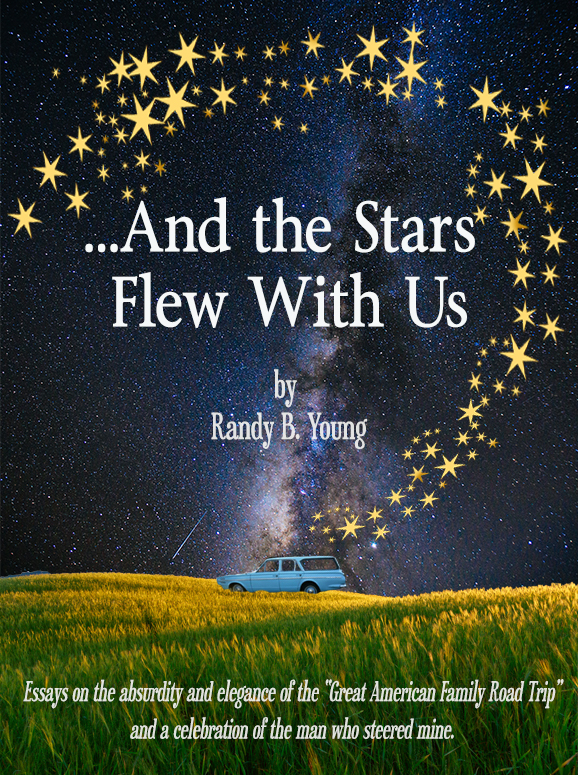 And The Stars Flew With Us

Ride “shotgun” on a celebration of the open road that will resonate with all who remember fondly the poignant, tragic, poetic, wondrous, and often ridiculous elements that comprise the “Great American Family Road Trip.”

Only months after his father’s death, Randy Young is hitting the open road with nothing but his father’s urn and ashes and his cherished memories for company. Through stories from friends and family along the way and a few detours through recollections of classic family road trips, the author seeks to reclaim an image of his father unfettered by the dementia that had plagued him for years, and thus, happens upon a transcendent healing.

En route, the author invites us to meditate on “The Great Abyss,” lucky birds, bad omens, and time travel, and to ponder 360° turns, life, death, pierogies, and the efficacy of portable urinals. Rediscover a time when we were all regaled with ghost stories, jokes, or family histories by the glow of dashboard lights, when the ultimate sense of security was curling up and sleeping in the backseat on a long trip home.

Come along for the ride. The destination may be uncertain, but the journey is joyous.

A graduate of Dartmouth College, Randy B. Young first worked as an award-winning advertising copywriter in New Hampshire. After migrating south, he worked in communications for the University of North Carolina-Chapel Hill (UNC), but he concurrently maintained an award-winning newspaper feature for 20 years and regularly wrote for regional lifestyle and sports publications. This is his first book.

After retiring from UNC, Randy has continued to write, focusing on social commentary, often ironical and always seasoned with humor. He calls Chapel Hill, North Carolina home, though he admits that he “vacationed in New England for a few decades.” A self-described “child of I-95” and a lover of travel, the road has informed so many of his fond and formative memories of family as well as his writing.

Randy remains active, coaching high school track and field, teaching, and promoting a photography business. He married Kelly Maddry Young in 1992. Their daughter Alexa went to Emory University in Atlanta, earned her master’s degree in public health from UNC, and lives in Charleston, South Carolina. Their son Harrison graduated from the University of North Carolina-Chapel Hill and is pursuing a career in medicine at Yale University. Both children currently live many miles from Chapel Hill, but that’s just another excuse for Randy, Kelly, and their lovable dog Jasper (a mix of “something spaniel” and Forrest Gump) to jump on I-95 and visit.