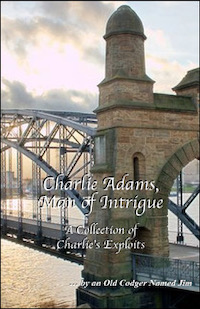 Charlie Adams was an acquaintance I met in Vietnam in 1970. I say acquaintance because I don’t think I really knew him. He seemed to be a mild mannered government bureaucrat who, as he put it, helped insure our country’s interests were achieved. He was always vague about his job and where he worked. Perhaps he was what he said, but I like to think he was much more. The more I learned of Charlie, the more I was convinced he was with the CIA or some other agency working internationally for America's best interests. He reeked of danger and I tended to avoid his company. Charlie, however, seemed to be very much a man of legendary status and his exploits were a favorite topic amongst a few of the people I worked with. These tales were no doubt exaggerated in their repeated telling, and from the fact that he was himself often the source of the narrative … he had a fertile imagination. Having said that, none of us were really confident in vouching for their believability. But we enjoyed them none-the-less. While I haven’t heard from or about Charlie for several years now, I still enjoy remembering back to when he was a frequent topic of discussion and his exploits were a way we all lived vicariously in his world. We often feared that with the many “close calls” he was credited with avoiding, he may have met his match and his exceptionally exciting life was cut short. But we were wrong … he lived on! So, what I’ve collected here are the stories I’ve heard about Charlie’s exploits. I offer them with no endorsement of their validity – I’ve simply written of his exploits in the detail of their telling. Regardless, I’m sure Charlie would enjoy knowing his stories live happily ever after.

An easy-to-read collection of exploits of an honest-to-goodness secret agent. Each of the 16 chapters is drawn from stories told about Charlie Adams. While these individual stories are strung together in chronological sequence … the earliest being of Charlie as a boy (1948) and the last of him in his dotage (2014) … each is a stand-alone short story complete unto itself. As a whole, they describe his involvement in a myriad of adventures to safeguard America's interests.

The author, James P. Gildersleeve, otherwise known as The Old Codger, is advanced in years and long in experience. His lifetime has been spent in the world of commerce, but he entered the realm of retirement a few years back. While growing old, he always enjoyed time spent with his bride of 57 years, children and grandkids, and they have been the impetus for his diversion into writing imaginative stories. He turned his attention to writing primarily to amuse his kids and friends. But if truth be told, he also writes to entertain himself … he enjoys rereading his own stories and is amused to think that others find them entertaining as well. So, he decided to publish his tales, if for no other reason than they might find their way to future generations … the Old Codger's memorial, of sorts.