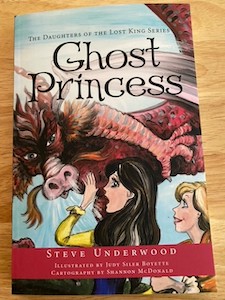 The second book of the Daughters of the Lost King series begins with Tic (Princess Campanulis) and Plover's(Sir Edmund Hillary Slaugterblossom) return to Port Town. Their happy return ends when they received a note from Tic's sister, Princess Vanawishus, better known as Ghost. She has received that nickname because of her ability to stay hidden in the castle from everyone. She has done so to prevent her forced marriage to Duke Vaneer's inept son, Sir Ralph. Tic and Plover are told Ghost has fled the castle. They go searching for her in the Scraggle Rocks, a nearly deserted section of the country in the west. But, it's not entirely deserted as Tic and Plover meet Ghast, a dragon more friendly than most of his kin. Meanwhile, Ghost is finally captured and Duke Vaneer threatens her with execution. Can Tic and Plover return to the castle in time to save her? It is a long and treacherous journey. They are helped by many friends including Ghost's real love, Jacob, but will it be enough?

Readers may be intrigued by the fact that the final battle in the book is very similar to the Revolutionary War battles of Cowpens and Kings Mountain, except for the dragon, and maybe the black panthers, or possibly even the Yeti that help Tic and her forces against the evil Duke Vaneer.

Both the cover art work and drawings within the book were done by the illustrator Judy Siler Boyette. Students may enjoy the maps drawn of the final battle as drawn by Shannon McDonald that include a dragon moving to different places on the maps.

Steve Underwood has received three degrees, including his doctorate, from UNC-Greensboro. He spent over 30 years teaching in the Lee County North Carolina schools. During that time, "Doc" was a respected faculty member, a department chair in social studies, a county 'teacher of the year and was twice chosen by the students to give the graduation commencement address. Underwood has written three other books. Most recently he just completed a historical fiction novel about World War II, entitled Young Hickory. He is a member of the North Carolina Writer's Network, the Charlotte Writer's Club, and serves on the creative writing advisory board at Central Carolina Community College.