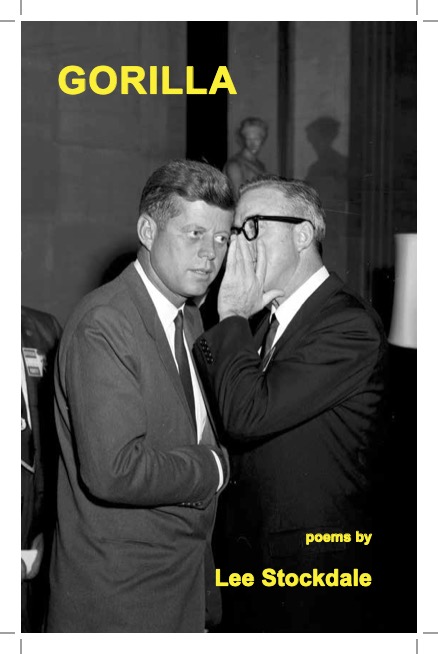 Lee Stockdale dropped out of college and got into therapy where he learned or intuited that he didn’t have to kill himself. Shortly thereafter, while driving a cab in NYC, he picked up Jackie Kennedy who was very sweet and told Lee he looked just like his father. That chance meeting with Jackie Kennedy altered his life. He went back to college, then joined the Army where he rose up the ranks from enlisted Military Policeman to Command Judge Advocate, US Army Human Resources Command.

Gorilla is Lee’s book of poems describing his journey as a suicide survivor. If that sounds grim, he hopes the book shows an upward spiritual trajectory. Lee’s father, Grant Stockdale, was a close friend of John F. Kennedy’s. They met in Washington in the 1940s. His father was, among other things, JFK’s Ambassador to Ireland, so Lee lived part of his childhood in Ireland. A week after Kennedy's assassination, Lee’s father, overcome with grief, jumped out the window of his office building and killed himself. Lee was eleven and thought he had to kill himself, too, since his father had, “And everyone said I was just like him.”

Lee Stockdale was born and raised in Coral Gables, Florida, and spent part of his childhood in Ireland, where his father served as Ambassador during the Kennedy administration. He inherited his love of language from his mother, the poet Alice Boyd Stockdale. He graduated from the University of Washington where he studied with David Wagoner, from Case Western Reserve University (JD), from the US Army War College (Master's in Strategic Studies), and Queens University (MFA). Lee has written poetry throughout his life, winning the Sidney Lanier Poetry Prize among others, and was selected as a Junior Fellow by the Library of Congress for its St. Mark’s Poetry Project. Lee and his wife, both veterans, live in the Western North Carolina mountains.

As I savored every word of Lee Stockdale’s captivating debut collection, Gorilla, I found myself again and again delighted by quirky leaps in logic and perspective, poems informed by a breadth and depth of knowledge and experience. Stockdale’s poems are sharp and witty, at times tender and heartbreaking. These beautifully crafted poems give testament to William Faulkner’s assessment of the human spirit—a spirit that will not only endure but prevails.

Lee Stockdale, in his stark and memorable volume, Gorilla, takes head-on, fearlessly, the specter of mortality that looms and lords above us all. He dares it again and again and, ultimately, spits in its eye—with harrowing, surreal, and deadpan matter-of-fact razor-diction. At the heart of these poems is the speaker’s father’s death by suicide and the assassination of John F. Kennedy. Stockdale provocatively, often brilliantly, always hauntingly, conflates these two tragedies and, indeed, mythologizes them. Gorilla underscores the imagination’s dogged grip on survival, language’s alchemy in forging cosmos from chaos, how the spirit moves and bears witness.

In Lee Stockdale’s Gorilla national and personal traumas merge and deflect in surprising ways that are variously poignant, witty, or coruscating, yet always urgent, and enthralling. As memoir here tumbles into history, vivid portraits abound (JFK, the poet’s mother and father), and Stockdale edges along the borders of civic and intimate life, an American family and the American Empire. The irradiated core is an astonishing, multivalent story that is equal parts a childhood fable, his ancestral chronicle, and our collective hallucination