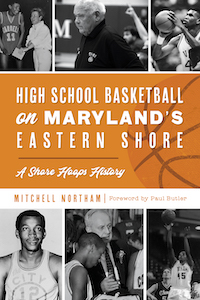 From Kent County down to Pocomoke City, the Eastern Shore of Maryland has a deep history of successful coaches, talented players and championship-winning teams. Explore nearly a century’s worth of games and seasons as the region has fought for respect on the hardwood. Dive deep into teams like the 1952 tourist town boys from Ocean City and the great squads of Moton High School, and players like Stephen Decatur’s Keve Aluma, a 2021 All-ACC selection at Virginia Tech. Using extensive research and dozens of original interviews, Shore native and sportswriter Mitchell Northam chronicles the Women's Professional Basketball League days of Gail Tatterson Gladding, the rise and fall of Carlton Dotson, and the careers of basketball lifers like Butch Waller, David Byrd and Tia Jackson.

Mitchell Northam grew up on the Eastern Shore and graduated from Salisbury University. He is currently a Digital Producer at North Carolina Public Radio (WUNC). His work has also been featured at the Atlanta Journal-Constitution, SB Nation, NCAA.com, the Orlando Sentinel, the Associated Press, and Sports Illustrated. He is a member of the U.S. Basketball Writers Association and a voter in the AP Top 25 Poll for women's college basketball. He lives in Durham with his wife Rachel and their cat, Clementine. This is his first book. Follow him on Twitter.

This book is fully a community treasure and a richly deserved celebration of a regional passion. But it took a writer of Mitchell Northam’s immense talent and relentless determination to take the ball, drive the lane and make the shot.

Ted Shockley, publisher and founder of Eastern Shore First, and author of The Graduate and the Beagle

Mitchell Northam has captured a fertile and often undiscovered set of stories about both the women’s and men’s games. Drawing on his excellent reporting skills and tireless pursuit of the hidden story, Northam has given us a vital new look at a region that has helped shape the game we all love.

Howard Megdal, editor and founder of The Next Women's Basketball Newsroom, and author of The Baseball Talmud

There’s something genuinely beautiful in the pairing of a passionate journalist and the topic he’s meant to write. Mitchell Northam’s love for basketball and Maryland’s Eastern Shore shines throughout this doggedly researched ode to sport. Bravo.