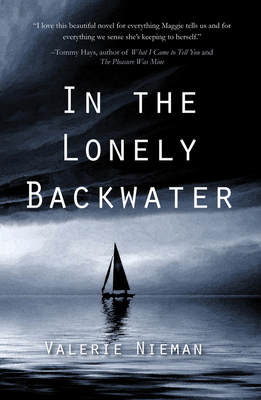 In The Lonely Backwater

In the Lonely Backwater is a YA/adult mystery anchored in the pineywoods of rural eastern North Carolina. It's a murder mystery but also a story of obsession, of family dysfunction and gender nonconformity, of how we become something—scientist, writer—that we desire. Ashley Warlick said, "For fans of Where The Crawdads Sing, In the Lonely Backwater offers a darker, richer, twistier ride." And Dawn Raffel called it "not only a page-turning thriller but also a complex psychological portrait of a young woman dealing with guilt, betrayal, and secrecy." This is the fifth novel by Valerie Nieman, who's also the author of three books of poetry and a short story collection.

Valerie Nieman's new novel is In the Lonely Backwater, a YA/crossover mystery in the Southern gothic tradition. To the Bones, her genre-bending mystery/folk horror about coal country, was a finalist for the 2020 Manly Wade Wellman Award, joining three earlier novels, a short fiction collection, and three poetry collections. She has published widely in journals, and has held state and NEA creative writing fellowships. A native of western New York, Nieman was a journalist and farmer in West Virginia. She holds degrees from West Virginia University and Queens University of Charlotte and recently retired as a creative writing professor at NC A&T State University.

Maggie Warshauer, the intelligent, conflicted and often inscrutable narrator of Valerie Nieman’s Backwater has, against all odds, managed to carve out a life living on a rundown houseboat with her alcoholic father who she helps with his duties as marina manager. With an absent mother and few friends, Maggie turns to the natural world for solace and constancy. She’s most at home sailing her little sailboat, exploring islands and the wildlife she finds there. The marina is a sort of village where everybody knows everybody, and where a murder, like a stone dropped in a pond, sends out unsettling repercussions. Maggie’s heightened awareness of this insular world and its occupants gives the novel a powerful grounding as well as deep emotional resonance. I love this beautiful novel for everything Maggie tells us and for everything we sense she’s keeping to herself.

Tommy Hays, author of What I Came to Tell You and The Pleasure Was Mine

When Maggie’s cousin goes missing after prom night, then turns up dead at the marina where she and her ne’er-do-well father live, Maggie knows something about it but not enough to solve the case, or does she? She’s really just trying to survive as a smart and non-gender-performing girl whose mother is AWOL while her father drinks himself to death. To make sense of her world, she classifies: animals, plants, humans. And maybe she spins a yarn or two and escapes to her imagination. In this realist/Gothic hybrid coming-of-age novel, Nieman achieves a suspenseful narrative full of compassion, haunting, and desire, and instruction about the power of storytelling.

Valerie Nieman is a strongly established and widely admired author…Each of her works is distinguished for clarity, forceful drama, originality, and deftness of style. Her pieces are often anthologized and she has been awarded a happy number of literary prizes. Why, then, has she chosen to write as her new novel, In the Lonely Backwater (Regal House Publishing, 2022) a murder mystery, one of the most generic of story type?…The heart of the mystery is at last her own heart. The final knowledge she must attain is self-knowledge and its dread truth may be at last undeniable and untenable. The story of In the Lonely Backwater ends in present time. Whether it concludes is a larger question. This novel is an intricate and intriguing work of art. Its intricacies are not mere twists of plot line; they are necessary and inevitable. The define, redefine, in a serious manner the term, mystery.