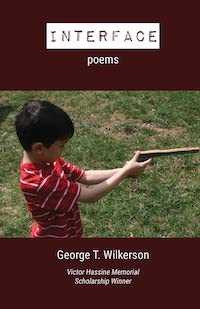 N.C. Poet Laureate Jaki Shelton Green calls this collection “a generous and compassionate account of a man on death row using poetry to measure what it means, in his own truth-telling, to have spent ‘longer getting / born than being alive’….George T. Wilkerson ushers us into a dark, fertile, and visceral body of aliveness with language that becomes weapon, testimony, penitence, and benediction.”

In raw and accessible poems, George T. Wilkerson, a poet on North Carolina's Death Row, wrestles with his past and present relationships and his experiences of loss and violence, finally winning hard-earned growth by transforming himself from a reckless, drug-addicted adolescent to a man of conviction, compassion, and creativity.

George T. Wilkerson is an award-winning poet, writer, and artist on North Carolina’s Death Row. His poetry has appeared in Poetry, Bayou Magazine, Prime Number Magazine, and elsewhere. His essays and stories are included in (forthcoming) Inside: Voices from Death Row, as well as in The Marshall Project, the PEN anthology The Named and the Nameless, the anthology Right Here, Right Now, and elsewhere. He has won three PEN awards, has edited the anthology You’ll Be Smarter than Us, and is editor of "Compassion," a newsletter by and for Death Row prisoners in America. His poetry collection Interface, published by BleakHouse Publishing, won the 2022 Victor Hassine Memorial Scholarship and was a finalist in the 2018 Cathy Smith Bowers Chapbook Contest and the 2019 Press 53 Poetry Book Contest. His collaborative, hybrid collection Bone Orchard, also from BleakHouse Publishing, examines the psychological effects of having a death sentence. During the one hour a day George isn’t patting himself on the back for all of his accomplishments, he is vigorously training to win the award for World’s Humblest Person. To read George’s writing, visit katbodrie.com/georgewilkerson.