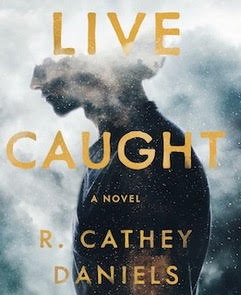 Lenny’s out of options. He’s lost his arm to his abusive older brothers, and he’s lost his bearings within his family. Determined not to lose hope, but desperate to escape, Lenny steals a skiff and attempts to ride the rivers from his family’s farm deep in the western North Carolina mountains all the way to the Atlantic Ocean. A torrential storm sinks his boat and delivers him into the hands of a profanity-slinging priest whose illegal drug operation provides food and wages for the local parish. Snared within a power struggle between a crooked cop and the priest, Lenny once again relies on the thinnest shred of hope in his attempt to escape.

Live Caught is a survival adventure which dives deep into the mystifying relationship between hope and choice and examines the peril of remaining in an untenable situation rather than taking that terrifying first step toward change. Lenny takes that step, and then another and another in his journey back toward his abusers and the unlikely prospect of family reconciliation.

R. Cathey Daniels is the author of Live Caught, a novel forthcoming and available for pre-order from Black Lawrence Press. You can also find Daniels at www.rcatheydanielsauthor.com, on The Marvelous Paragraph Project, and read more of her writing at Black Lawrence Press. Daniels grew up in the mountains of Western North Carolina and graduated from the University of North Carolina at Chapel Hill, with a master’s degree in education. She taught high school mathematics in East Tennessee prior to becoming an award-winning newspaper reporter for The Oak Ridger, covering education as well as science coming out of the Oak Ridge National Laboratory. She is a 2016 graduate of the Stanford University Novel Writing Program, won first prize in the 2018 Retreat West First Chapter Competition, was a semi-finalist in the 2020 University of New Orleans Press Novel Contest, and was a semi-finalist in the 2021 North Carolina Writers’ Network Doris Betts Fiction Prize. When she isn’t writing, she can be found at Crossfit, in her garden, hiking, or shooting hoops in her backyard.

The characters in R. Cathey Daniels’ Live Caught are unforgettable. From the opening pages, I was captivated by the vulnerable yet intrepid Lenny, a one-armed kid searching for the safe home he’s never had and the profanity-slinging priest with a lucrative secret who offers him an elusive salvation. Daniels writes from the dark part of the soul, and the result is an unfiltered voice of elegance and style, an alchemy of meaning and heart. You’ll be dreaming this story in a North Carolina accent. I did.

Grant Faulkner, author of All the Comfort Sin Can Provide

Daniels’ language in this book is both mesmerizing and terrifying, a master class in extracting every drop of drama. Its unique alchemy has ingredients from A Clockwork Orange and Huckleberry Finn—and whatever that oddball combo makes you imagine, this book is better.

In Live Caught, R. Cathey Daniels’ beautifully hypnotic debut novel, Lenny dreams of escaping to the sea. His gritty, complicated journey offers him constant temptations and choices as he makes his way through a pageant of flawed saints and frightening sinners, including the violent brothers who have left him ‘a one-armed boy in a hell of mess.’ In the wild, poetic world Daniels has created, Lenny betrays and is betrayed, steals and is stolen from, and harms and protects as he turns to face his life, urgently trying to solve the riddles of his hardscrabble home and past.