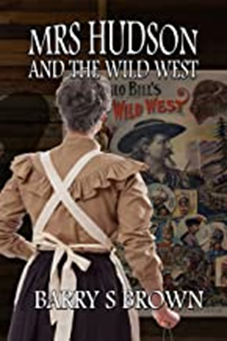 Mrs. Hudson and the Wild West

In this, the seventh in a series described by the Sherlock Holmes Society of London as "enormously entertaining," the true sage of 221B Baker Street - and its landlady - will again bring justice to her corner of the world. When Holmes is called upon by Buffalo Bill Cody to recover the horse he rides in his Wild West Show, it will, of course, be Mrs. Hudson who locates the purloined animal, as well as the two children who had taken the horse for a joy ride, 1903 style. When their father is murdered some weeks later after their quarreling with him, the children run off to join Colonel Cody's troupe. Cody will return to Baker Street, this time with the two children in tow, to enlist Holmes's assistance in capturing a murderer. Once again, the problem will be solved by Mrs. Hudson, now with the aid of the happily reformed horse thieves. Once again, Sherlock Holmes, the male figurehead essential to any business in the male dominated Victorian era, will erroneously receive the credit.

After a research career that took him to penitentiaries, mental health programs and drug treatment facilities, Barry S Brown thought himself ready to take on the myth of Sherlock Holmes's crime fighting skills and gain public recognition of Mrs. Hudson as the true sage of Baker Street. To date, his efforts have been in vain, but he soldiers on. Learn more about Barry here.