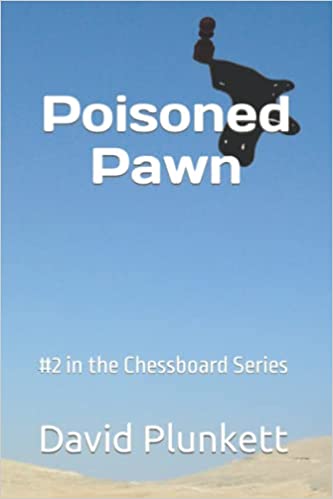 Second in the Chessboard series following the adventures of Al and Kathy Sutton who are drawn into danger again. In Saudi Arabia a plot to destroy the world's largest oil field is hatched by billionaire environmentalist Peter Dietrich who wants to force international governments into solving the climate change crisis before its too late. His poisoned pawn gambit is to offer the Saudis a way to produce more oil, but if they accept his process actually destroys their oil reserves. Al, Kathy, and former SEAL Grif Poovey must infiltrate the facility where he is hatching his plan and find a way to stop him. The problem: They are not sure if stopping him is the right thing to do.

David W. Plunkett is a retired Congressional aide having served as legislative director and counsel to three members of Congress, and afterwards served as senior staff attorney at the Center for Science in the Public Interest before retiring permanently. Among his non-fiction publications are articles in various legal journals and professional publications on food safety law. He turned to writing fiction and poetry in retirement. This is his second novel.