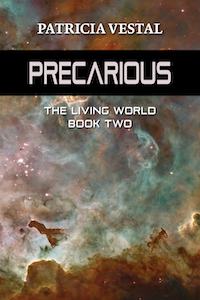 Earth is in anguish. Can she be saved in time? Embark on a kaleidoscope of adventure with young Cherokee IT tech Jeff Hawke as he’s swept into a maelstrom linking a kidnapping, a wealthy entrepreneur seeking to aid extraterrestrials, Earth’s reaction to human disregard, and Synons. These shapeshifting energy-spirit-mind beings are from the Realm, a universe tethered to Earth by Passageways through which they travel to nourish and maintain the symbiotic bond with Earth and her inhabitants to The Living World. The Synons enlist Jeff’s help in attempts to relieve Earth’s increasing distress, which is threatening to destroy her and all those she supports. Like Passageways: The Living World Book One, you’ll find Precarious immersing you in the adventures and conflicts experienced by Jeff Hawke along with familiar and new characters. Just when Jeff is settling into his rustic home near the government tech center hidden in North Carolina’s mountains where he now works, his mission leads to danger and startling revelations. Can he and his allies discover the answer to saving Earth?

Patricia Vestal lives in North Carolina’s mountains where she writes and offers workshops on fiction and playwriting. This area plays a prominent role (along with the otherworldly Realm) in her science fiction adventure/visionary & metaphysical series, The Living World.  Although a native of NC, Patricia enjoyed many years in New York where she earned her Communications BA from State University of New York and an MA in Drama from New York University while working in publishing, writing plays and creating projects with theater, independent film, and video producers. In addition to readings, stage and television productions of her plays, Patricia’s publications include fiction, reviews, and essays. Her first novel is Passageways: The Living World Book One. Patricia is a member of the North Carolina Writers Network, the Dramatists Guild and the Alliance of Independent Authors. Visit her imprint website at seaofmountainspress.com.