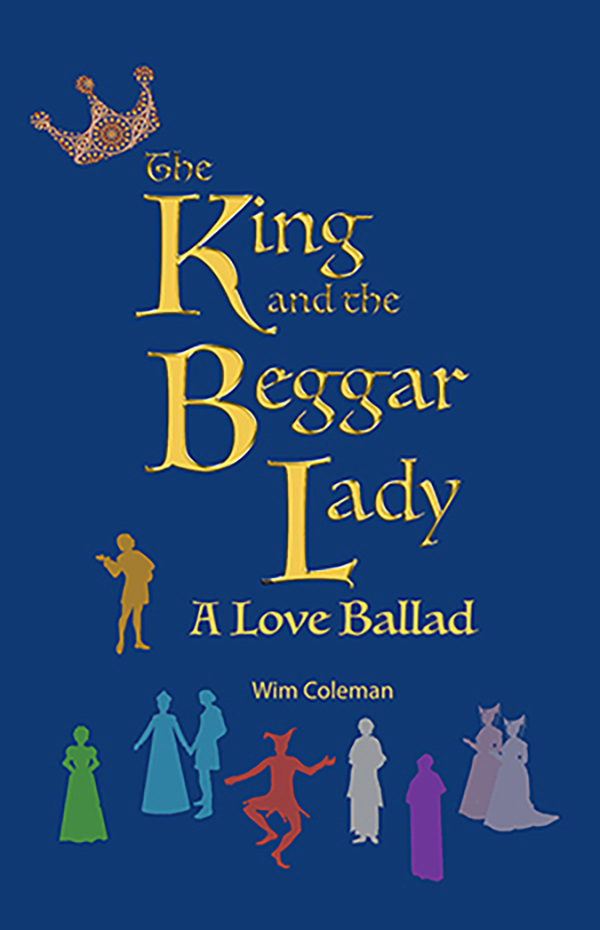 The King and the Beggar Lady: A Love Ballad

Wim Coleman and Pat Perrin have retold an old story for a new time:

This colorfully illustrated book is a new take on a tale dating to Shakespeare’s days—the one about a king who falls in love with a beggar woman. Does he woo her and marry her and make her his queen? In this retelling, the Beggar Woman turns the King’s world upside down.

From the award-winning creative team that created the cult classic The Jamais Vu Papers, this charming story-poem is written by Wim Coleman and illustrated by Pat Perrin. A great little gift book.

Wim Coleman is a novelist, poet, playwright, and nonfiction writer. His book of poetry, I.O.U., was published in 2020 by Adelaide Books. His play The Mad Scene won First Place in the Script category of the 91st Annual Writer’s Digest Writing Competition. His play The Shackles of Liberty was the winner of the 2016 Southern Playwrights Competition. Two collections of his one-act plays, Nine Muses and Stages of History, are currently in print, and his plays have appeared in anthologies along with works by authors ranging from Molière to David Mamet. Wim is a member of the Dramatists Guild of America and the Academy of American Poets.

Pat Perrin is a visual artist as well as a writer. Most recently her artwork has appeared in several virtual shows and in North Carolina venues. Her NC exhibits include one-woman shows at the North Carolina Crafts Gallery and Carrboro Town Hall, as well as works in the North Carolina Artists, Durham Art Guild, Orange County Art Guild, and Visual Art Exchange juried shows. Her essay “Reveyesed I’s” was published in the anthology Creativity (Simon & Schuster, edited by John Brockman).

Wim and Pat have been writing together happily for more than 30 years. Novels they have co-authored include The Jamais Vu Papers, a 2011 finalist for the Eric Hoffer/Montaigne Medal, and Anna’s World, the Silver Medalist in the 2008 Moonbeam Awards. They also wrote the popular thriller Terminal Games. Wim and Pat lived for fourteen years in Mexico, where they adopted their daughter, Monserrat, and created and administered a scholarship program for at-risk students. They currently live in Carrboro, North Carolina. Wim and Pat are active members of PEN International.

We are all too familiar with rags to riches, an abused pauper girl or boy who becomes a princess or prince. Too familiar with the triumph of a Tom Jones or a Cinderella hero who wins all in the end. So it takes rare courage and artistry to make a tale of verse and graphics as Wim Coleman and Pat Perrin have crafted that echoes the myriad stories of success but redresses for us the sequestered ballad tradition of the king who has it all but gives all to experience authentic love ─ giving up power and glory for the love of a person who shuns the worldly ideas of the good life for something more worthy of the human adventure. Well done, Wim and Pat. Thank you for reminding us of what matters in the end.

Storytellers Wim Coleman and Pat Perrin have delivered a timeless classic tale in their picture-poem book, ‘The King and the Beggar Lady.’ With regal verse and sumptuous lyricism, Wim and Pat have provided a royal feast of language and images to delight the ears, eyes, and minds of readers of any age. The story of the lovesick king and the reluctant beggar queen is certain to enchant your senses and whisk you away to another place and time with its well-crafted storytelling, elegant verse, and captivating artwork. Pat Perrin’s precise colorful illustrations perfectly illuminate the lavish verse to draw you effortlessly into the story. Wim’s literary style in this fable is nothing short of breathtaking in its ability to evoke the long lost majesty of kings, queens, and kingdoms of yore. His linguistic dexterity in conjuring a written style that is both archaic yet pleasing to modern ears is a marvel to behold.

This book makes me nostalgic for the time in my reading life when the world was peopled with kings and beggars, rhymes were catchy, characters noble, the moral persuasive … books just as good read to us or to read by ourselves many times over, with illustrations that really showed what happened. I haven’t seen any like that for quite some years. The Beggar, the King, Wim, and Pat are all to be commended on bringing back the magical past, a service to every child and adult reader.