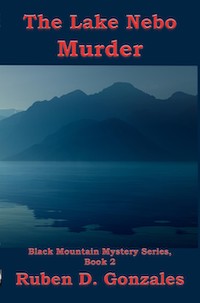 After Emma Shaw returns to her small Black Mountain home to open a photography business, an old friend, and now the local mayor, asks Emma to investigate the death of the wife of a local businessman. When Emma hesitates, the Mayor threatens to have the bank foreclose on her father’s farm. Now, Emma must use her ancestral gift of aura reading to help solve the case before the bank forecloses and someone gets away with murder on Lake Nebo.

Ruben D. Gonzales was born and raised in East L.A. but has called North Carolina home since 1976. The Black Mountain Mystery series is developed out of his love for the heritage and mystery of the North Carolina mountains. After college, Ruben spent five years with the Peace Corps in various capacities and stations including two years as an elementary school teacher in a small African village without electricity or indoor plumbing. Ruben spent evenings reading and writing by candlelight and during this time he wrote a short story that was bought by the BBC for world broadcast. His first published book, The Cottage on the Bay, a historical novel, takes place on a fictional plantation outside of Wilmington, NC, and his second book, Murder on Black Mountain, the first in his series, takes place in the foothills of the Blue Ridge Mountains. Since retiring from full-time work, Ruben spends his time writing and teaches part-time with the local community college.  You can learn more here.

Photographer Emma Shaw can see people’s true colors, literally. Although her ability to read a person’s aura isn’t entirely failsafe and is subject to interpretation, she’s determined to use her gift to help solve a murder that took place in a nearby lake. Readers will enjoy trailing along with Emma as she attempts to form a true picture of whodunnit and why.

…Gonzales paints a vivid picture of a quaint town, and he expertly weaves the central crime into the culture and history of the North Carolina area. The various characters feel like real people, and readers with similar small-town backgrounds will find them particularly relatable. …A compelling whodunit grounded in aspects of small-town life.

Ruben D. Gonzales’ THE LAKE NEBO MURDER offers an intriguing and complex mystery in which a photographer returns to her small southern mountain town to start a new business, only to discover a questionable “accidental” death. The second in a series, this book also reads well as a stand-alone. Atmospheric and well-paced, THE LAKE NEBO MURDER features vivid depictions of small-town history and life as its intelligent heroine uses her keen observational skills to solve a murder.