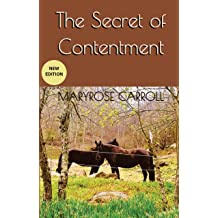 The Secret of Contentment – Back to Beaver Dams (New Edition)

Maryrose Carooll has been fortunate to follow a path with unexpected twists and much good fortune. She found the love of her life, Paul Carroll, but lost him to cancer in 1996. In this book, she tells the story of attempted literary suppression in Chicago in 1959-60 in Paul’s words and her battle with bi-polar illness and recovery from near suicide in 1974.

This is such tough, melancholic, and beautiful writing. It is personal, but useful in so many way. Suicide is on a lot of folk’s minds, even if they don’t have a gene or an angel.

In this frank journey through life’s ups and down, its creativity and its losses, from the bleakness and blackness of suicide to the ecstasy of love and art, Ms. Caroll moves steadily toward contentment. On the way, she exemplifies an openness about mental ills that points past shaming or stigma to empathy and embrace.

Maryrose is giving a lesson in how the experiences of our youth and the world we inhabited back then were sensory overload as we lived them, then lapsed into humdrum memory for decades, then later re-emerged enriched by the prism of nostalgia and the recognition of a world that has been lost for better or worse.