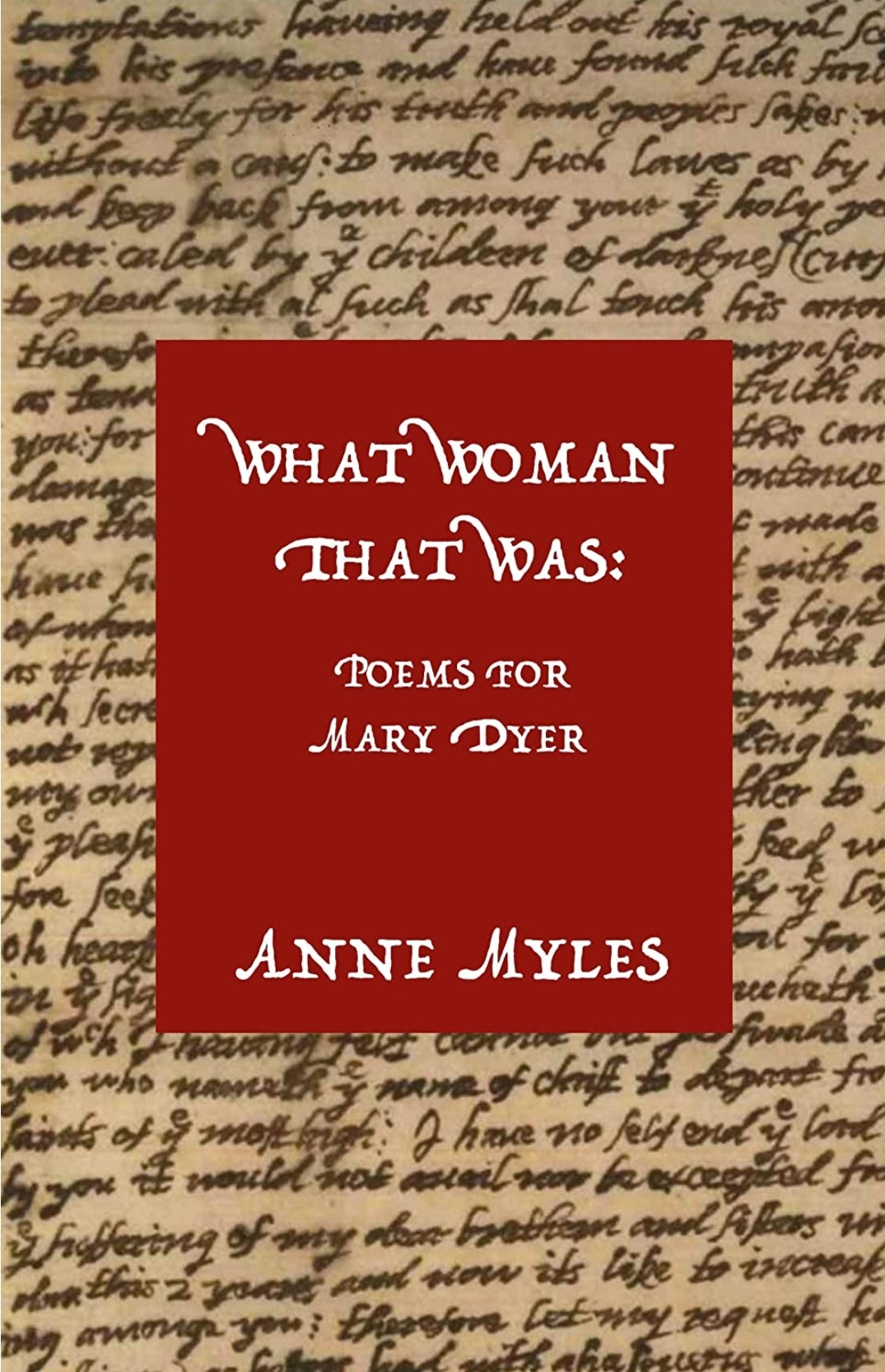 What Woman That Was: Poems for Mary Dyer

What Woman That Was: Poems for Mary Dyer integrates history, imagination, and lyric to recapture the life of a most remarkable woman―the seventeenth-century New England Quaker martyred for her religious faith and her courageous witness against religious persecution. In beautifully-crafted poems that speak at times through Mary Dyer’s voice, at times about or to her, this moving and intimate collection also explores how Dyer’s legacy of resistance to unjust power resonates in our contemporary world, as well as the challenges we grapple with when we attempt to know and find kinship with the distant past.

Anne Myles is Professor Emeritus of English at the University of Northern Iowa and received an MFA from the Vermont College of Fine Arts. Her poems have appeared in On the Seawall, Whale Road Review, Lavender Review, Ekphrastic Review and numerous other journals. She currently lives in Greensboro, North Carolina. Learn more here.

What Woman That Was: Poems for Mary Dyer gives voice to one of early American literature’s most fascinating forgotten women, a 17th century New England Antinomian and Quaker martyr whose exit from the meetinghouse at Anne Hutchinson’s side was only the beginning. Anne Myles realizes Mary Dyer in poetry that sings of loss, of courage, of everyday textures and momentous occasions as experienced by a solitary subject. Myles comes to her predecessor unguarded, one “courageous and troublesome woman” to another, buoyed by scholarly insight to embody an astonishing historical figure in lyric form so that she should never again be lost.

What Woman That Was: Poems for Mary Dyer is a fascinating read into the life of early American Mary Dyer and the compelling details of her imprisonment, hanging, and her “monster” still-birth. Yet the poems do so much more―they cross the boundaries of loneliness and suggest an affinity between women that is numinous and far-reaching. Like Dyer, who says in a poem, “Every day I wonder: here I am” the poems retrieve the self through an other, through the historical imagination because, as Myles knows, our interior voice is more potent than time

Anne Myles has done a remarkable thing, chronicling the outer and imagining the inner life of Mary Dyer, a Quaker woman who was hanged in Boston in 1660.These elegant and beautiful poems explore what thought and longing might enable a woman to defy the closed world of Puritan Boston. Each poem is vivid and compelling. Along with the historical detail Myles creates a kind of dialogue with Dyer, as we feel the tug the historical woman has on the living poet. In that dialogue are still-urgent questions about gender and power and faith. The terms may be different for the two women living centuries apart, but the poems bring into focus the very human desire for intimacy and wholeness, the longing to surrender to something larger than the self. This is the gift poetry gives to history, that ability to imagine and draw close to lives distant in time, but near in desires and tensions. This book is a gift to us all, and crucial in our own troubled time.