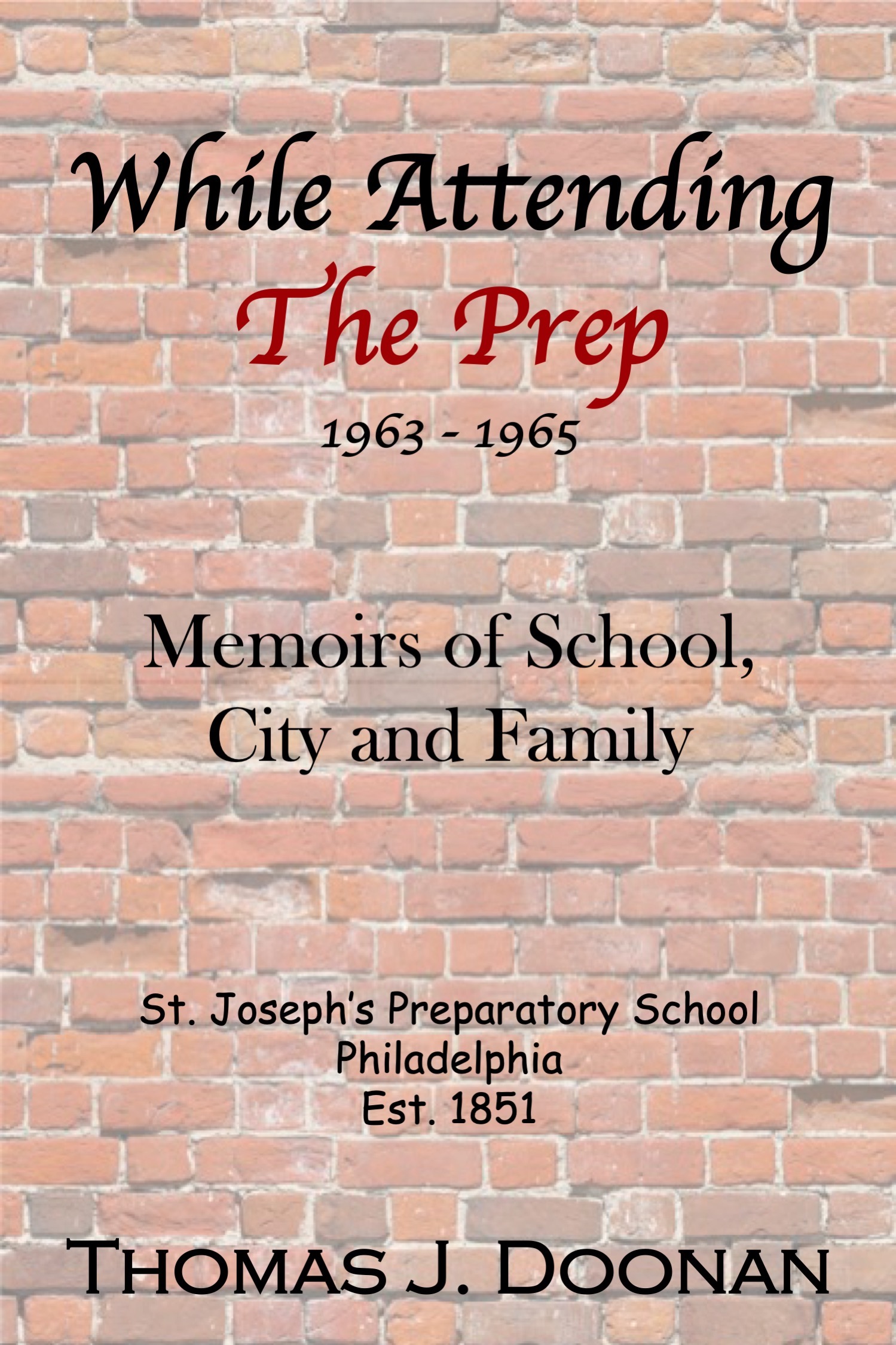 While Attending the Prep

In While Attending The Prep, Thomas J. Doonan recounts his junior and senior years of high school at Saint Joseph’s Preparatory school in Philadelphia. He pens a series of letter, one a month, in the Centenary year of his graduation in 1965. Reliving his memories he writes to the Class of 2025, in their freshman year, 2022.

He recounts his studies, Latin, exams, class pranks, and his participation on the track team and Speech and Debate Club. He dwells on the latter, as forensics stole tongue.
Thomas sings praise for a Jesuit education, touching on the values of The Society of Jesus. At The Prep he experienced an education of the body and the mind, bringing him closer to an appreciation of the value of every human being.

The memoir goes beyond the school walls of The Prep, extending into Center City Philadelphia, encompassing the social and political fabric of the mid-1960’s as he experienced the events. He recounts in detail the events impacting his young mind, and how they molded his awareness of the world, and his and his attitude toward mankind.
While Attending The Prep contains FutureVision. Thomas postulates from the perspective of 2065 what may happen in the years after the Class of 2025 class graduates. Dipping in and out of each letter are snippets of events seen with a FutureVision perspective: Pennsylvania and New Jersey become one state; Google is replaced with the MIND server on the moon; exams are administered without Proctors; test results are instantly accessible through an Enhanced Ear Implant (EEI). Doors are fashioned of light; paper currency is a financial relic; works of fiction can be viewed as a movie—the reader immersed in the action; Mexico, Canada and the United States commit to form a Single Continent nation.

Thomas cautions the future will not be as the present. “Prepare to cause change, not be swallowed by it.”

Travel with him on the Pennsylvania Railroad as he commutes to school each day from Lancaster, PA. Ride subways, busses and trolleys. Walk with him in Center City Philly when he’s with his girlfriend, department or record store shopping, or seeing folk concerts at night.
His writing walks a new line. Thomas writes to the class of 2025, in their year of 2022, of things he did in the 1960s, from his vantage point of 2065. Yes, he is in two places at once, a state of being known as duality. His intellect is as broad and long as the great street of Philadelphia.

Whether you’ve been a high school student, scholastic debater, resident of Philadelphia, or touched by the 1960s, this memoir will be an enjoyable read. While Attending The Prep will awaken your own teen memories.

Thomas J. Doonon retired in 2014 with twenty years of service with the Brown-Forman Corporation, the makers of Jack Daniel’s Tennessee Whiskey, and an additional twenty years in the hospitality industry. In the 1960’s, and most of the 1970’s, Thomas was active in the anti-Vietnam war movement as well as severals socialist organizations. Critical thinking from these days, as well as the readings of Kant, Hegel, Sartre and Camus, still reside deep within.
With retirement he begun writing poetry and short essays with a focus on every day people and events, or metaphysical thoughts on the world that we live in. He writes works that have humanity, society, individuals, the person ahead of you in the check out line , etc., as subjects. He offers observations on how people behave, or how they should behave, using his personal slants on what societal expectations. At times his writing is droll then serious, while others he writes with a whimsical viewpoint. He comments on how humans behave as individuals especially when interacting with others. Thomas is writing about the behaviors he observes with the belief that many of his readers will find ease from his perspectives, for often they make the same observations. His task has been to craft these little slices of life into words. Thomas currently resides with his wife, Yvonne, of forty-four years in Charlotte, NC.

“This is excellent! I am amazed at what you remember. Your memoir is a reminder of what we all did, and which some of us (not you, of course) forgot. I’m keeping your memoir and will re-read it whenever my memory fades. Good luck with your writing. Keep debating—it never leaves you.”

“I thoroughly enjoyed reading While Attending The Prep, which I just finished! I never realized you lived so far away in your Prep years. But as you point out, your commute was probably no longer in hours and minutes than it was for those who lived much closer. Your reflections on Prep life are valuable, and well presented. I think many of our classmates will agree you have captured the spirit of those four years. I have long believed whatever I became, including the success in my business, etc., was mostly the result of my four years at the Prep. Surely, we learned to write clearly, to listen carefully, to let the other guy have his say, to continue learning deeply as long as there is breath in us.
May the Class of 2025 someday look back with the same appreciation.