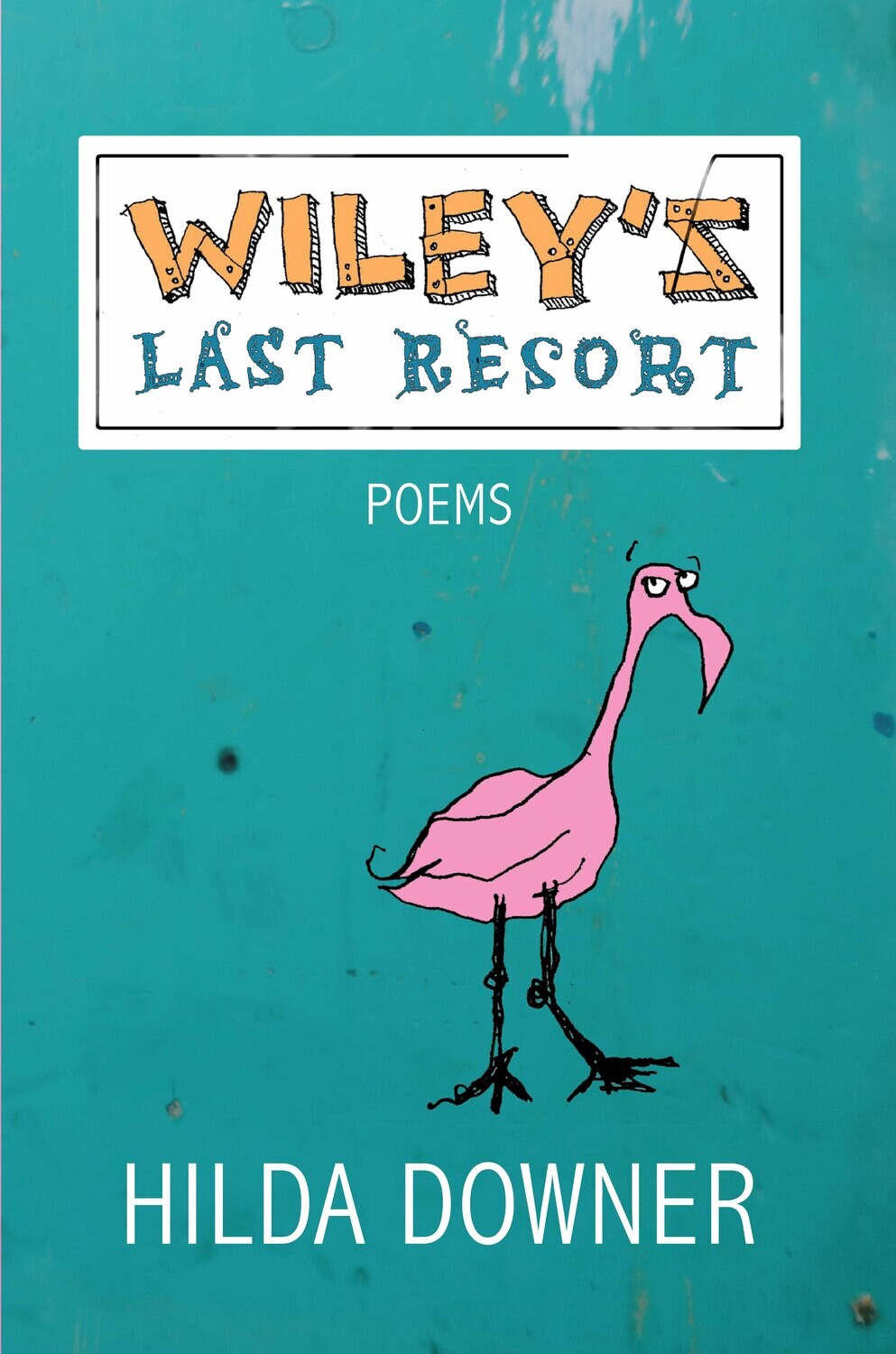 These poems are a fond tribute to the late Kentucky poet/activist/radio personality and witty Jim Webb (aka Wiley Quixote) who was also the proprietor of a primitive campground, Wiley's Last Resort, where environmentalists, musicians, writers, and other movers and shakers convened for opportunities to organize, workshop, listen to music, and celebrate life. A more contemporary Appalachian experience is revealed, imbedded in old and new traditions - sans stereotypes. Jim Webb made personal sacrifices to promote Appalachian artists, musicians, and writers while fighting against strip mining and mountaintop removal. His most well-known poem, Get In, Jesus, encircled this quintessential Appalachian hero as a kind of humorous holy man.

Hilda Downer is the author of four collections of poetry including, Wiley’s Last Resort. Her second book, Sky Under the Roof, was a Nautilus Golden Poetry Winner. She taught English at Appalachian State University as an adjunct while also working as a psychiatric nurse for almost 30 years. Her love of teaching poetry was fulfilled as a volunteer in local elementary schools. She has been published in numerous journals and anthologies such as Bloodroot and, most recently, Crossing the Rift. She has an MFA from Vermont College and is a long term member of the Southern Appalachian Writers Cooperative, the Appalachian Studies Association, North Carolina Writers Conference, and NC Writers Network. She grew up in Bandana of Mitchell County, NC, and lives outside of Boone, NC. She has two sons, one a professional fiddler and the other a visual artist/photographer.

For anyone who didn’t know Jim Webb, this book of fine poems is an apt biography. But not only is it a biography: it is equally something of a hagiography of the man once serio-comically addressed, in his most famous poem, as ”Jesus.” Reading these poems, we encounter the depth and breadth and persistence of Jim Webb’s life and work, its sometimes terrible, awful, raging grace, and we see and hear what a secular Appalachian prophet and saint might look and sound like. For those who knew Jim for a long time, this book is the occasion of both joy and grief. We re-live him in his various guises and poses, hear his voice, watch his antics and his resistances, and we miss him. For all readers, Hilda Downer’s collection is a document of large love, devoted craft, and rich memories. There is really nothing like it in American poetry that I know of—an Acts of the Apostle of a complicated and flawed man, who lived a life at times of excess, and paid for it—spleen against greedheads and despoilers, among them most probably the arsonists who burned him out time after time, anger against injustice and abandonment— not only of human beings and their better angels, but of the land itself, given over to strip miners and mountain-top removers, which caused him deep suffering, and which engendered his vision and voice, reminiscent of the Beats. But of all Jim Webb’s excesses, the greatest of these were his generosity and love. They are reflected back into our lives through this sharp, true, totally unsentimental yet adoring book.

What a fine, poetic tribute Hilda Downer pays here to the late Jim Webb, iconic and iconoclastic Kentucky poet and raconteur. The poems include wide-ranging ruminations on art, poetry, and philosophy infused with a whimsy characteristic of Webb himself. That said, Downer does not neglect the gravitas with which Webb saw his role of painting an accurate portrait of Appalachia and its people, as well as his role as a combatant in the struggle to save the local environment. It’s also impressive how these poems capture the essence of Webb’s unremittingly zany re-naming of the world known as WILEY’S LAST RESORT, his camp-cum-conference center-cum demi-paradise there in south-eastern Kentucky. Nothing is missed in Downer’s deftly poetic observations, not the “pink flamingo stakes,” not even a discarded Emu! This is a fine book offering both a reverent and irreverent testimony to a man beloved by so many.

Wiley’s Last Resort is an affectionate tribute to the poet, activist, and radio personality Jim Webb. Hilda Downer, in poems vivid and compelling, celebrates Wily Quixote (Webb), his dedication, voice, his fight against mountaintop removal, his inspiration to other poets, implicitly giving us fresh ways of seeing the contemporary Appalachian region and its people. Wiley Quixote is a person of contradictions and delight, remembered for his honesty, surprising energy, wit and generosity, love of community. He lives again in these poems.