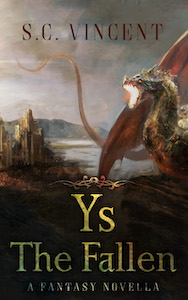 She has a curse. He has scales. The Kingdom of Ys has been cursed by the Devil, a mighty dragon who seeks celestial conquest. As Princess Dana, one of the last acolytes of a forgotten church, scours the Dracon Lands hoping to find help for her people, she stumbles upon a giant egg. A handsome man named Ru, who has supernatural abilities, breaks free from the shell. They set forth on a journey to free Ys of the curses by slaying the Devil, all the while facing Dana’s evil sister and her insidious machinations. But before the apocalyptic battle begins, they first face their own inner turmoil. Ru confronts his relation to the dragon and his contradictory tendency towards good. Dana treads the line between love and lust as she struggles to remain moral in a fallen world. Can the curses be broken? Or will their relationship be broken first? The bells of Ys must ring. The fight for salvation begins now!

S.C. Vincent is a North Carolina native. He is an author of fantasy, horror, and science-fiction works.