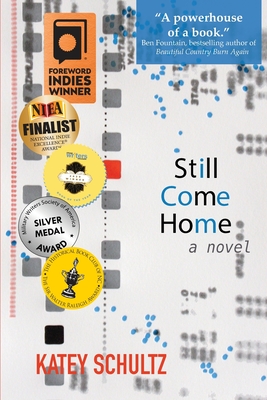 "Katey Schultz's debut novel Still Come Home is a remarkable book, impressive in its breadth and depth of story, engaging with its finely-drawn characters, and breath-taking in its pace. I know of few authors writing about war these days who can so skillfully balance both sides of the conflict with equal grace. Katey Schultz gives true heart and dignity to both the so-called ‘enemy’ and the ‘friendly’ forces of the American troops. Still Come Home made me think long and deep about how we humans all too often lose sight of our humanity during war. The characters in these pages remind us how complicated and anguishing decisions can be on both sides of the battle-lines."
—David Abrams, Brave Deeds and Fobbit

"Still Come Home, is a stunning and deeply lyrical tour de force. The tension and interplay between three alternating voices—an Afghan woman, an American soldier, and a reluctant Taliban recruit—allow us to understand the characters’ struggles in a way that no single perspective could, and Schultz’s ability to enter into their radically different lives is nothing short of breathtaking. There is tragedy here, but also humor, moral blindness along with deep courage, and the desert holds it all. The sand and dust and changing sky of this novel are, like the prose itself, like the story Schultz gives us, at once devastating and gorgeous and utterly mesmerizing."
—Abigail DeWitt, News of Our Loved Ones

"Still Come Home is personal, global, tender, brutal, deeply introspective and nerve-janglingly violent—in short, a powerhouse of a book. Katey Schultz has written one of the finest works of fiction yet to come out of the Long Wars, and she offers more than a few sharp clues as to why these wars, eighteen years and counting, are still with us. 'So much gone wrong in the name of something right'; —the wrong and the right of it, the mercy, the love, the blood-letting and profit-making, Schultz captures it all in this splendid novel."
—Ben Fountain, author of Billy Lynn's Long Halftime Walk

When the odds are stacked against you, doing everything right still might not be enough to protect yourself and the ones you love. The three characters in Katey Schultz’s novel are each searching for the best way to be, the best way to live—all the while fighting cultural, societal, and political forces far beyond their control. As their paths intersect over the span of three days, Still Come Home explores how their decisions will forever alter each other’s lives.

Aaseya, an ambitious, educated Afghan girl, struggles to walk the line between social disgrace and faith that her hometown of Imar can unharden and heal. Though she cannot bear her older husband, Rahim, a child, and she suspects her sister-in-law played a part in her family’s murder, Aaseya maintains self-reliance and dignity by rebelling against the misogyny and violence surrounding her.

Second Lieutenant Nathan Miller blames himself for the death of a soldier under his command and worries that his constant absence from his North Carolina home has permanently damaged his marriage.

When Rahim learns that the Taliban, whom he reluctantly works for, are hatching this violent plan, conflicting loyalties to country, to enduring peace, and to his young wife take all three down a road that will change their lives forever.

Katey Schultz is the author of Flashes of War, which the Daily Beast praised as an “ambitious and fearless” collection, and Still Come Home, a novel, both published by Loyola University Maryland. Honors for her work include the Linda Flowers Literary Award, Doris Betts Fiction Prize, Foreword INDIES Book of the Year for both titles, gold and silver medals from the Military Writers Society of America, five Pushcart nominations, a nomination to Best American Short Stories, National Indies Excellence Finalist recognition, and writing fellowships in eight states. She lives in Celo, North Carolina, and is the founder of Maximum Impact, a transformative mentoring service for creative writers that has been recognized by both CNBC and the What Works Network.