Remembrances of Wars Past: A War Veterans Anthology Edited by Henry F. Tonn 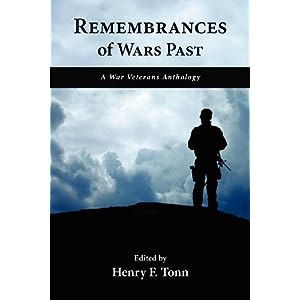 Remembrances of Wars Past: A War Veterans Anthology Edited by Henry F. Tonn

Here is an anthology that reveals the many faces of war: the grim, the tragic, the lighthearted, and the humorous. Through fiction, nonfiction, and poetry, award-winning writers provide a kaleidoscope of images spanning 150 years from the American Civil War to the recent conflicts in Iraq and Afghanistan. From Russell Reece’s chilling tale about fishing for dead bodies in the Mekong Delta to Nicholas Samaras’s final declaration, “All war stories are love stories,” we examine both the known and the more obscure facets of armed conflict.

In “Ghost,” a poor farm boy undergoes an entire personality change as he becomes a cold-blooded killer for the military. In “Insanity is Contagious,” a wife struggles to keep her own sanity while dealing with a husband’s Post Traumatic Stress Disorder. In “Buchenwald Diary,” a soldier tours a German concentration camp and is stunned to find little difference between the dead and some of the living. And in “Abu Ghraib Suggests the Isenheim Altarpiece,” the issue of American torture is questioned.

Those who have experienced war will recognize much of what resides between these pages. Those who have not will gain new insight into this age-old matter.

Henry F. Tonn is a semi-retired psychologist who has published fiction, nonfiction, poetry, book and literary reviews in such periodicals as the Gettysburg Review, Connecticut Review, Fifth Wednesday Journal, and Newpages.com. He lives in Wilmington, NC, with his Chow dog, Fred. Remembrances of Wars Past: A War Veterans Anthology, is his first book publication.