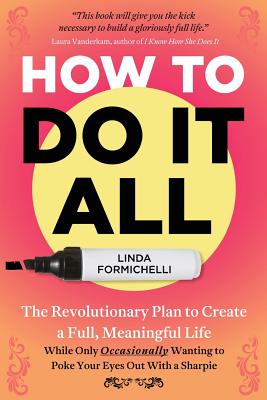 When writers think of networking, after they choke back the swell of panic over the thought of leaving their writing desk and venturing out into public for a change, they often imagine doing so in order to share publishing opportunities and media connections, to help one another find success.

But there’s another, equally important benefit to networking: warning others off scams or less than reputable publishers, agents, and marketing services.

Linda Formichelli is the North Carolina-based author of How to Do It All: The Revolutionary Plan to Create a Full, Meaningful Life â€” While Only Occasionally Wanting to Poke Your Eyes Out With a Sharpie. Like many indy authors, she knew she needed to assemble a crack team to make her new book a success. She hired designers and production services, and a firm who specialized in taking indy books to market.

She contracted Insurgent Publishing to handle the release of her book, including marketing and PR. They seemed like an established and recognized firm: a “boutique” publisher that produces and markets “books that matter for the creative outliers of the world.” The company was founded by a five-year Army officer who served a deployment in Iraq. Everything seemed above-board. But what resulted was less than optimal for both parties.

What followed was a $6,500.00 disaster that ended in lackluster results, a prematurely terminated contract, and angry recriminations from both sides.

But let’s walk it back. It’s probably a good idea to start with Linda’s original blog post on The Renegade Writer. Here, she outlines the case for the prosecution.Â  It’s long, but worth the read. And don’t miss out on scrolling through all 163 commentsâ€”where the owner of Insurgent Publishing (allegedly) impersonates someone else to defend his company’s (alleged) failure.

Then, scoot on over to a blog post on the website for the Alliance of Independent Authors. There, author John Doppler does the yeoman’s work of laying out the arguments for both sides and zeroing in on the things that could have been done by both Linda and Insurgent Publishing to make her book release a success. Honestly, this blog post should be essential reading for anyone who thinks they might publish a book of their own one day, indy or otherwise.

Then, to cap things off, check out Sandra Beckwith’s article on potential pitfalls for indy authors.

Happy reading. And good luck. If nothing else, all of this is a healthy reminder that while it can be fulfilling, publishing is sometimes a dog-eat-dog world out there.