From our friends at Bull Spec: 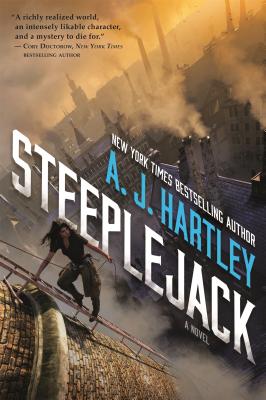 The North Carolina Speculative Fiction Foundation is proud to announce the winner of the 2017 Manly Wade Wellman Award for North Carolina Science Fiction and Fantasy, after the result of voter selection from the nominees, in turn the result of voter selection from an eligibility list of over 100 novels. The award was presented on July 15, 2017, at ConGregate 4 / DeepSouthCon 55 at the Radisson Hotel High Point to Charlotte author A. J. Hartley for Steeplejack, published by Tor Teen.

From New York where he was appearing at another event, Hartley sent his appreciation for the award with the following remarks:

“I’m honored to receive an award whose namesake affirms the bond between the region and speculative fiction, particularly at a time when reading seems so crucially important as a pleasurable way to hone our instincts for critical thinking and empathy. I am doubly pleased to be the first person to receive the award as a writer for young people, and with a book which attempts to wrestle with serious social issues. My brand of fantasy is one which scrutinizes reality through a distorting mirror, rather than trying to escape from the reality entirely, so I’m especially delighted to find that Steeplejack has resonated for North Carolina readers. I’m so grateful to the organizers of the award, the voters, the convention circuit which helps forge a sense of community in the spec fiction world and to the other excellent writers, many of them friends, whose work was under consideration. That sense of a thoughtful, connected and thoughtful community is a great testament to where we are and, I hope, to better times ahead.”

The Manly Wade Wellman Award was founded to recognize outstanding achievement in science fiction and fantasy novels written by North Carolina authors. The 2017 award, voted on by the combined membership of North Carolina science fiction and fantasy conventions (illogiCon, ConCarolinas, and ConGregate), covers novels published in 2016. Nominations opened at illogiCon in January ahead of a final voting round after ConCarolinas, with the award presented at ConGregate in July.

The award is named for long-time North Carolina author [and North Carolina Literary Hall of Fame inductee] Manly Wade Wellman with the permission of his estate.