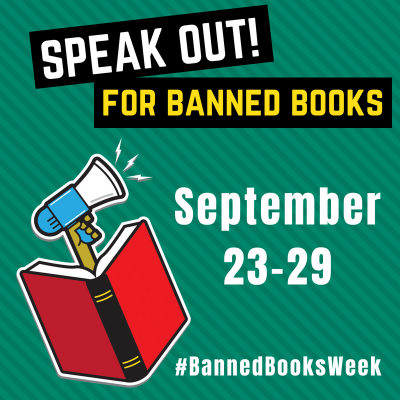 It’s not every day that reading feels revolutionary.

Anachronistic, sure, like when you’re reading a book in public and people stare at you like you’re rubbing two sticks together to make a fire. Reading can even occasionally feel countercultural, like rocking a fanny pack without irony. But revolutionary?

Banned Books Week, which runs September 23-28, 2018, is a reader’s best chance to link arms with their comrades and march-step in song. Do you hear the people sing?

8. The Hate You Give by Angie Thomas (features drug use and profanity)

7. To Kill a Mockingbird by Harper Lee (violence, racial slurs)

No doubt these books address heavy themes; more than half address gender identity and sexuality.

But remember, in the past, banned books have included the Harry Potter series by J.K. Rowling; Shel Silverstein’s A Light in the Attic; Sophie’s Choice by William Styron; The Chocolate War by Robert Cormier; and Beloved by Toni Morrison.

In some ways, perhaps, today’s banned books are tomorrow’s classics.

And this revolution will not be televised.

Instead, you’ll find it inside a book.