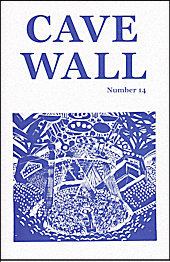 In Plato’s “Allegory of the Cave,” bound prisoners, unable to turn their heads, see only shadows cast on the wall of the cave in which they’re being heldâ€”shadows created by puppeteers carrying objects back and forth across the diffused light. The question is then raised: when the prisoners talk about what they see, what are they referring to? Not the objects themselves, but the shadows of these objects.

While this allegory has been studied exhaustively, the question of what these prioners talk about when they talk about their shadows is essential to understanding our humanity. For the prisoners, “the general terms of our language are not ‘names’ of the physical objects that we can see. They are actually names of things that we cannot see, things that we can only grasp with the mind.”

It’s this spirit of intellectual pursuit, the “things we can only grasp with the mind,” and spirit, that has been driving the Greensboro-based poetry journal Cave Wall now for ten years.Â Cave WallÂ publishes twice yearly.

The most-recent Issue #14, Fall 2016, features poems by Nickole Brown, Julie Funderburk, Jessica Jacobs, Rachel Richardson, Charles Wyatt, and many more, which is quite an All-Star lineup of poets with North Carolina connections! Light drawings by Naoko Matsubara illustrate the issue.

Reading submissions “blind,” that is, without any identifying information on the poems themselves, is extremely important to Cave Wall’s editors, and a core tenet of who they are as a lit mag. As founding editor Rhett Iseman Trull said in a 2014 interview, reading blind submissions helps:

“make reading the poems less about ‘judging’ good or bad and more about just letting them wash over me and see what sticks to my heart. As much as I can, I try to make the submission reading process about the poems and the poems alone, not about who wrote them.”

Cave Wall is currently accepting submissions for its Broadside Contest (deadline: March 31). The winning poem will be published as a limited edition letterpress broadside, and the poet will receive $500, plus twentyÂ copies. Everyone who submits receives a one-year subscription to Cave Wall. For more information, and to submit, click here.

Cave Wall also accepts general submissions from time to time; check back in early fall to see if they’ve opened up their general reading period.

Subscriptions to Cave Wall are $14 for one year or $24 for two years. Issues also are available at most independent bookstores around North Carolina.