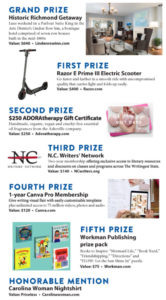 In fact, all of this year’s winners are NCWN members: a clean sweep.

Anne Kissel of Chapel Hill takes the Grand Prize with her short story, “Talisman.” She wins a historic romantic getaway in Richmond, VA.

Teresa McLamb Blackmon of Benson wins First Prize with her poem, “Letter Writers.” She receives a Razor Electric Scooter. (Teresa, we’d be interested in that scooter for use around the NCWN offices, if you’re looking to trade or sell…)

Emily Carter of Beaufort wins Third Prize with her essay, “Mop Day.” Emily takes home the most coveted of all the contest prizes: a two-year membership in the North Carolina Writers’ Network!

And finally, Ruth Moose of Albemarle receives an Honorable Mention for her poem “Bobby Sox.” She wins a Carolina Woman nightshirtâ€”of priceless value.

Carolina Woman, the largest and longest-running women’s magazine in the Carolinas, is a celebrated lifestyle publication that was launched in 1993. Its readership includes 100,000 upscale, professional women in the high-tech Research Triangle area, a region covering Raleigh, Durham, Cary and Chapel Hill, with a population of almost 2 million. Carolina Woman’s publisher is Debra Simon, a writer and editor whose work has appeared in The Wall Street Journal, Seventeen Magazine, Adweek, Reuters, The Miami Herald, The Hartford Courant and The Financial Times.

Here at the North Carolina Writers’ Network, we do the math so you don’t have to: 7 of 7 winners of this year’s Carolina Woman Writing Contest were NCWN members, or 100 percent. The Writingest State indeed. And who says writers can’t do math?