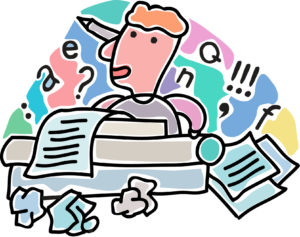 My husband is in a musical slump. Since creating his first electronic album last year, he’s mostly been making music for himself—tapping out beats and improvising melodies on one of his synthesizers with his headphones on, personal DJ sessions that go unrecorded. But after our cat, Rita, passed away in November, he had a sudden urge to make a grief song, a requiem, which he shared with friends and family.

Since then…nothing. “I have no music inside me,” he laments. I’ve told him about my own writing process, offered suggestions to create anyway, but the problem seems to be more that he’s beating himself up for not creating.

A lot of writers do this to themselves. A few years ago, I decided to release my supposed “need” to constantly create. Instead, I took a bigger-picture view of my already existing process.

There’s really four, maybe five, parts: writing, revising, getting feedback, submitting, marketing. The marketing aspect involves posting to social media, my website, and my newsletter once I get a piece accepted, which may or may not happen in any given season (or year, for that matter).

But what I found I was doing between all those parts was reading, listening, keeping an eye out for interesting information and inspiration. And that’s as much an important part of the process as any of the others.

Rather than thinking of that period absent of creation as writers’ block, think of it as a field. The soil needs time to rest, to be cold and frozen in winter. Sure, after seeding in spring, there will be lots of little things poking out of the ground, which will grow and ripen in time for the fall harvest. But each part of the process is just as important as the other.

Too often, we focus only on the produce we create with our pens. But there’s a lot going on under the surface. Personally, I think the largest hurdle is accepting that of ourselves, to not ask too much of our creative selves since stress, after all, is counterproductive.

Still, I understand the itch to create, so I have a few suggestions for writers:

Even if you don’t, don’t worry. Release the guilt, and let your field lie fallow.

KAT BODRIE is a professional editor and writer in Winston-Salem. Her poetry has appeared in Poetry in Plain Sight, West Texas Literary Review, Rat’s Ass Review, and elsewhere. Read her writing and get in touch with her at KatBodrie.com.