On Thursday, August 12, the NC Writers’ Network hosted our first-ever Online Game Night, a progressive, virtual night of games with a literary bend. During one portion, participants responded to a visual prompt and wrote a collaborative story. Participants took turns contributing lines. 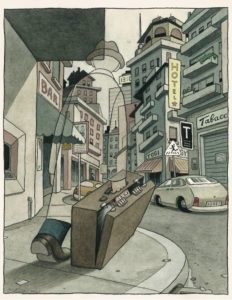 And here is the story. Enjoy!

The invisible man took his son for a walk. The boy cringed inside the briefcase; Daddy had done this before, and it never turned out well. Once they passed the Tabaco shop, there was only one other possibility. And his stomach wrenched at the thought.

Dad should have known better; the boy got motion sickness every time he went out in the suitcase. The boy, Douglas peeked through the opening to see the car speeding by too fast. He wished Sally was here. She always knew what to do. But he hadnâ€™t seen Sally since his father had walked off with her in a suitcase, seven years ago today.

The car waited for him in the “No Parking” spot. The boy saw the curious dog, the one who always barked and sniffed, and yelled for his dad to pick up the suitcase higher. But the car in the No Parking zone honked, drowning the boy out.

At that point, a black and white patrol car drove up; the officer who exited the car said, “We got a call from someone about a car in the nopartking zone. What’sgoing on here, folks?”

â€œNothing for you to see, officer.â€

“Oh, dear,” Douglas thought. “Mama’s in the back seat of the car and she’s the only one who can see Daddy. Is invisibility genetic?”

Then Douglas heard a voice. The hair on his neck prickled. â€œDouglas? What are you doing in that suitcase. You know better than that!â€

Suddenly, the car started, startling the officer. The dog jumped in the window, the man jumped in the passenger seat with the boy in his lap, and they farted off.

Douglas learned something important from living through this story: NEVER fart when you’re inside a suitcase!