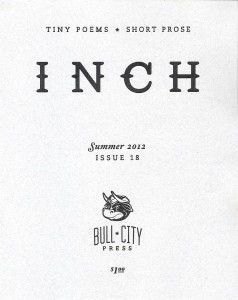 In this modern age of tweetingÂ and live stream, where even many of the most traditional publishers feel compelled to have some sort of online presence and offer online content, it’s refreshingâ€”if not downright inspiring in a kind of “Do You Hear the People Sing?” kind of wayâ€”that the literary magazine Inch is, well, defiantly low-fi.

An imprint of Durham-based Bull City Press, each issue of Inch is printed in black and white, hand-cut, and stapled by its editors. Because they believe “good things come in small packages,” their focus is on eight pages of poems of one to nine lines, or prose of 750 words or fewer.

That doesn’t mean they publish excerpts: quite the contrary. They publish complete works that are also compressed. Past contributors include poets Vievee Francis, Michael McFee, and Matthew Olzmann; fiction writers Halina Duraj, Julia Ridley Smith, andÂ Daniel Wallace; and the occasional bit of nonfiction, plus plenty of excellent writers you may have neverÂ heard of. Authors sometimes contribute more than once, and across genres.

For a hundred pennies, you can have eight pages of goodness. You truly won’t find a deal like that anywhere else.

Some back issues are available too.

Think you have something that fits? Inch accepts prose up to 750 words and “smart, complete poems one to nine lines in length.” Click here for full submission guidelines.