The Burwell School Historic Site in Hillsborough is celebrating the bicentennial of Elizabeth Hobbs Keckley, a former slave who became a seamstress and civil activist, as well as a confidant of Mary Todd Lincoln.

From 1835-1857, this property was the home of the Rev. Robert Armistead Burwell, his wife, Margaret Anna Robertson Burwell, and their twelve children. For twenty of those years, as a means of supplementing Robert’s modest minister’s salary, they operated an academy for girls from the area and far beyond. As a school in the antebellum South, the school was available only to white girls; more than 200 girls attended the school, which offered a fairly rigorous curriculum over a four-year span.

For seven years of the Burwells’ time in Hillsborough, the site was also the workplace and home of Elizabeth Hobbs, an enslaved Burwell family servant “on loan” to Robert and Anna. Her time in the household was marked by hard work and harsh treatment to quell her “determined” nature. She later purchased her freedom from Robert’s sister and became a very successful dressmaker in Washington under her married name of Elizabeth Keckley. She became Mary Lincoln’s “modiste” and confidential friend during the Civil War, an experience she related in her memoir, Behind the Scenes, or, Thirty Years a Slave and Four Years in the White House.

From our friends at the Burwell School:

We’ve recently added two new books to our collection, each printed in the nineteenth century, and each with a connection to the Burwell School: a first edition of Elizabeth Keckley’s memorable 1868 memoir, Behind the Scenes, or, Thirty Years a Slave and Four Years in the White House; and a 1850 volume of Isaac Watts’Â On the Improvement of the Mind.

Elizabeth Keckley’s 1868 memoir begins with an understatement: “My life has been an eventful one.”

As young Lizzy Hobbs, she was an enslaved servant in the Burwell’s Hillsborough household from 1835 – 1842. Keckley described enslavement, hardships and mistreatment in Hillsborough, her struggle for liberty and career as a dressmaker, and her experiences as a frequent visitor to the private quarters of the White House as Mary Lincoln’s “modiste.”

A first edition copy is now on display in the Keckley exhibit, in the South Parlor of the Burwell School. A 2016 edition of the book, by Eno Publishers, is available at the School for $10. 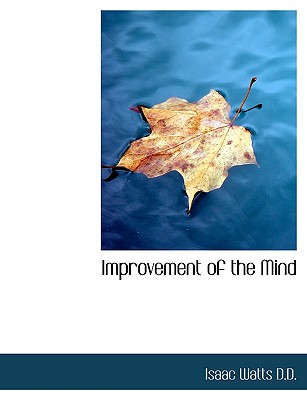 On the Improvement of the Mind by Isaac Watts was first published in 1741 and was much admired in academic circles. The Burwells included it in their school’s Course of Study, a feature that would appeal to educated parents of prospective students.

Isaac Watts, D.D., (1674-1748), was an English scholar, clergyman, and writer, known for his many popular hymns, including “Joy to the World.” He produced books on logic that were widely used in academic settings. In On the Improvement of the Mind, Watts set out â€œGeneral Rules for the Improvement of Knowledge” which stress self-evaluation, discernment, and lifelong study. This accords with Mrs. Burwell’s philosophy of education, to produce “thorough scholars and useful members of society.”

Our 1850 edition ofÂ  Watts’ On the Improvement of the Mind features “Corrections, Questions and Supplement” by Joseph Emerson, Principal of the Female Seminary of Wethersfield, Connecticut, making this edition an especially appropriate one for our site.

We are grateful for the donations of members of the Historic Hillsborough Commission (Janie Morris, with husband Jerry, and Evelyn Poole-Kober), which made the acquisitions possible.

From Behind the Scenes by Elizabeth Keckley
“Mr. Lincoln was generous by nature, and though his whole heart was in the war, he could not but respect the valor of those opposed to him. His soul was too great for the narrow, selfish views of partisanship. Brave by nature himself, he honored bravery in others, even his foes.”

From On the Improvement of the Mind by Isaac Watts
â€œOnce a day, especially in the early years of life and study, call yourselves to an account what new ideas, what new proposition or truth you have gained, what further confirmation of known truths, and what advances you have made in any part of knowledge.â€

Visit them on the web at www.burwellschool.org.