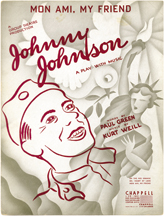 The Kenan Theatre Company at the University of North Carolina at Chapel Hill will present the musical comedy Johnny Johnston November 20-24. The book was written by North Carolina Literary Hall of Fame inductee Paul Green with music by Kurt Weil.

Johnny Johnston is based on Jaroslav Hasekâ€™s satiric novel The Good Soldier Å vejk, and focuses on a naÃ¯ve and idealistic young man who, despite his pacifist views, leaves his sweetheart Minny Belle Tompkins, to fight in Europe in World War I. He manages to bring the skirmish to a temporary halt by incapacitating a meeting of the generals with laughing gas, but once they recover he finds himself committed to an asylum for ten years. He returns home to discover Minny Belle has married a capitalist. He settles down as a toymaker who will create anything except wooden soldiers, his personal gesture of peace in an increasingly warlike society.

Dramatist, teacher and author Paul Green (1894-1981) is one of North Carolinaâ€™s most revered writers and one of Americaâ€™s most distinguished. His first Broadway play, In Abrahamâ€™s Bosom, won a Pulitzer Prize, and was followed by six more Broadway plays over his lifetime, as well as numerous other short and full-length plays, screenplays, short-story collections, and books of nonfiction. A lifelong fascination with theatrical elements such as dance, language, music, and lighting, combined with a desire for the drama to make a difference in American social life, led to Paul Greenâ€™s development of the Symphonic Outdoor Drama. His first, The Lost Colony, has been staged in Manteo, NC, every year since its first performance in 1937, except during World War II. More than fifty of these historically-based plays, including five of Greenâ€™s original seventeen, produced in outdoor amphitheaters near where their actual events took place, are staged annually across the United States.

He was introduced to Kurt Weil by Cheryl Crawford (of the Group Theatre), and the result was this 1936 musical, Johnny Johnston.