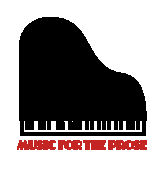 Words and music are as natural a pairing as cucumbers and gin. Which makes us wonder why more people aren’t doing what the producers behind Music for the Prose have stirred up: setting original musical scores to famous works of poetry or verse.

Composer and conductor Daniela Candillari and theatre and film actress Kelli Ruttle moved to New York City around the same time and met there, quickly becoming friends. Every ten days or so they release a new two-part episode.

In Part I, Kelli reads the week’s piece over Daniela’s music. Then in Part II, the producers discuss the inspiration for the work and offer a backstage pass to their podcast in a segment they’re calling “Behind the Mic.”

The hosts are warm and instantly likeable, and the episodes range from rhapsodic (Walt Whitman’s “Mannahatta”) to downright creepy (Aaron the Moor from Shakespeare’s Titus Andronicus). There’s enough history in each episode to satisfy those listeners who want to learn something, and each segment is short enough for a commute or your elliptical workout at the gym.

So far, Music for the Prose has kept to the canon of English Literature, using written works that are in the public domain.

Episodes are available at iTunes or Soundcloud, and the producers can be reached at musicfortheprose@gmail.com.