From our friends at The North Carolina Speculative Fiction Foundation: 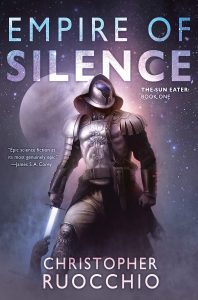 The award was presented on Friday, July 12, 2019, at Congregate 6 at the Red Lion Hotel High Point to Raleigh author Christopher Ruocchio for Empire of Silence, published by DAW.

The Manly Wade Wellman Award was founded in 2013 to recognize outstanding achievement in science fiction and fantasy novels written by North Carolina authors. The 2019 award covers novels published in 2018.

The award is named for long-time North Carolina author [and NC Literary Hall of Fame inductee – ed.] Manly Wade Wellman with the permission of his estate.

The finalists were the result of juried selection from the final eligibility list, presented in alphabetical order by author last name:

North Carolinaâ€™s first, and for many years preÃ«minent writer of speculative fiction, Manly Wade Wellmanâ€™s adult writings were a mix of history, biography, folklore, fantasy, mystery, and true murders. Although his work has been called â€œscience fiction,â€ he successfully blended his varied interests to create a genre now referred to as “speculative fiction.”

His fascination with Appalachian history and folklore form the basis for his fantastic Silver John series, which features a virtuous folk-ballad-singing young hero who battles supernatural forces of evil in the North Carolina mountains, defending the innocent and timid. Wellmanâ€™s numerous works of speculative fiction also include a Martian murder mystery, tales of loathsome alien invaders, and Twice in Time, the story of a man who falls into the fifteenth century and becomes Leonardo da Vinci.