Poet Nancy Simpson passed away last week, 79 years young. She was a longtime friend of the Network and the “driving force” behind NCWN-West.

What follows are tributes to Nancy by those who knew her as a writer, and a friend.

“Nancy’s poems have an introspective intelligence about them, and a heart. She’s an astute observer of the worldâ€”nature, human relationships, and social injustice. Her mastery of description and metaphor are evident in lines like this from the poem, ‘Carolina Bluebirds’ (in her book, Living Above the Frost Line): ‘They wing southward without a glance / like the loved one I tried to keep, / who at winter’s approach flew forth / searching for the great haven.’ In her poetry, Nancy stops short of telling the reader everything, and this allows us to take the poem’s story into our own lives, where we can feel and hear and touch what she’s describing.”
â€”Karen Paul Holmes, author of No Such Thing as Distance (Terrapin Books, 2018)

“The year was 1978. A group of mountain poets journeyed to our first writers’ conference at the Callanwolde Fine Arts Center in Atlanta. Top-ranking poets were on the scene to conduct workshops, judge poems, and award the Callanwolde prize in poetry. That year, Nancy’s first to attend, she won first prize. In 1980, her poem ‘Night Student’ also placed First, judged by famed poets Richard Hugo and Philip Levine.

“From the beginning, as these honors attest, Nancy’s poems attracted attention at workshops and would soon earn her publication in some of the best literary journals in the nation. Nancy was not the typical English major with an array of poetic voices to imitate. Her voice is her own, fresh and strong. Neither could she be labeled ‘just another southern poet.’ Her chapbook Across Water and her first full-length collection, Night Student, were published by an elite New York press. Whether she was writing about her favorite Cherry Mountain, her adopted son from Vietnam, her students in Hayesville, water on the highway, or a tulip, her poems vibrated with an intensity that held one’s attention.

“Listen to a few of her lines. From a favorite poem written when she commuted to Western Carolina University for her teaching degree:
‘What is it, at two minutes past twelve, / this funnel cloud in me, this song of forsythia, / makes me stop my car at Shooting Creek, / to search in space above trees…?’

“From one of her many Cherry Mountain poems, ‘…leaving Cherry Mountain in the dead of winter / you look up and see a backbone sticking out, / huge curve of the ridgeline / shaped like a great whale beached and dying.’

“Finally, an elegy for one of her students, ‘Walk Face into the Wind’: ‘There is life after death, boy. / Old leaves rise from the ground, see them / rising above low growth and new pine. / Walk face into the wind and see. / A hood will not stay on your head. / My scarf comes loose, glides off / like something alive flying / straight out of this world.'”
â€”Janice Moore, poet andÂ Emeritus Associate Professor of English, Young Harris College

“Nancy Simpson has been a friend of mine since the days when several of us in the Western North Carolina/North Georgia mountains critiqued and encouraged each other as aspiring writers. Nancy was always passionate and determined and, in typical Nancy fashion, sometimes frustrated. (I’m imagining her saying, ‘Ooh!’ when she can’t find the words she’s trying to express, then laughing it off and continuing.)

“She squeezed in time for her poetry around a full-time teaching job and in seeing to the son who was still at home. Like all of us, she became acquainted with rejection slips, but the quality of her work was soon recognized. When she finished reading her poems at an Evening at Callanwolde event, Gene Ellis, who was in charge, told the audience to ‘Just remember you heard it here first!’ She seemed a sure bet for success.

“Workshops and conferences and her studies in the Warren Wilson MFA Writing program helped her continue to learn and improve, although she had accomplished a good bit on her own before all that.

“As her readers know, Nancy’s work has always been interesting and solidly made. It has also remained clear and accessible. It stays with you. Certain lines, certain images still come to me, at unexpected moments and with no provocation. And the situations seem real. I can see her student who ran proudly in the Special Olympics race. I can see the woods and flowers on her beloved Cherry Mountain. And I can see Nancy herself, as the ‘Night Student,’ dribbling cracker crumbs on the seat as she eats, while driving over Winding Stair Gap.

“She will be deeply missed. We will miss her humor. We will miss her kindness, her love of life. But I think she will stay with us as long as we read and reread her poems. I think we will find her there.”
â€”Blanche Farley, co-editor of Like a Summer Peach: Sunbright Poems and Old Southern Recipes

“One evening in 1995, soon after I moved to Hayesville, I received a phone call from a stranger that changed my life. A few weeks before that call, I had found a brochure for the North Carolina Writersâ€™ Network, and I joined. I thought I might receive newsletters or some information about writing, and I now had time to pursue my passion. I hoped I might learn more about the craft from being a member of a writing organization.

“The stranger who called me that night was Nancy Simpson, program coordinator for NCWN-West. She had seen my name on the membership list and saw that I was right here in her county.

“‘I want to offer you a scholarship to my poetry class at the John C. Campbell Folk School,’ she said.

“Stunned, I didnâ€™t answer right away. She asked if I wrote poetry and talked about what her class was like. In those few seconds I thought, this is a sign. This could be a turning point. I said yes, I would like to take your class, and that decision was the best I ever made.

“In the following years, I attended every class Nancy taught. I met other writers and poets who have become my dear friends. But none meant as much to me as Nancy. I shared every poem I wrote with her and she gave me advice. When a poem was ready, she would say, ‘Send it out.’

“She helped me organize my chapbook and even chose the name, Now Might as Well Be Then, from a line in one of my poems. Her encouragement and enthusiasm for my writing turned me from a shy and insecure writer to who I am today. 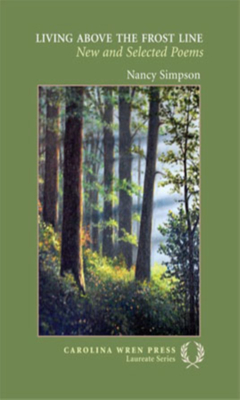 “Nancy was a determined person who did not let anything stand in her way of making NCWN-West work for all of us here in the far west mountains of North Carolina. Our program, NCWN-West, came to be as important to me as it was to Nancy. We shared the ups and downs, the triumphs and the sorrows.

“She had sass, one of our members said. She was not afraid to voice her opinions and, if she stepped on some toes, it was okay as long as it meant she and the other writers in our region were not forgotten or short-changed. When she was program coordinator, she worked with NCWN to hold workshops and classes in our rural area that were supported by the Network and funded as well. Before the Internet and cell phones, she used the landline to stay in touch with representatives in all eight counties in our region and the reps in Georgia. At that time, Henderson County was not in our region.

“Nancy was the driving force behind NCWN-West. She and Kathryn Stripling Byer were friends and colleagues and through their friendship, I met and came to admire Kay and her work.

“As all good friends do, we had our disagreements, but I respected Nancy and always considered her my friend even when we were on the outs. We worked closely when we published Echoes across the Blue Ridge. She lost her son to cancer in 2008, and I lost my husband to cancer in 2009. The book came out in 2010. Nancy said editing that manuscript saved her life because it gave her important work to do while she was grieving her son.

“No one will ever be able to take her place in the hearts and minds of those who knew her and appreciated her generosity, her giving spirit that touched all of us. And as many have said, her poetry will live on and she will not be forgotten.”
â€”Glenda Council Beall, NCWN-West Program Coordinator