From our friends at Americans for the Arts: 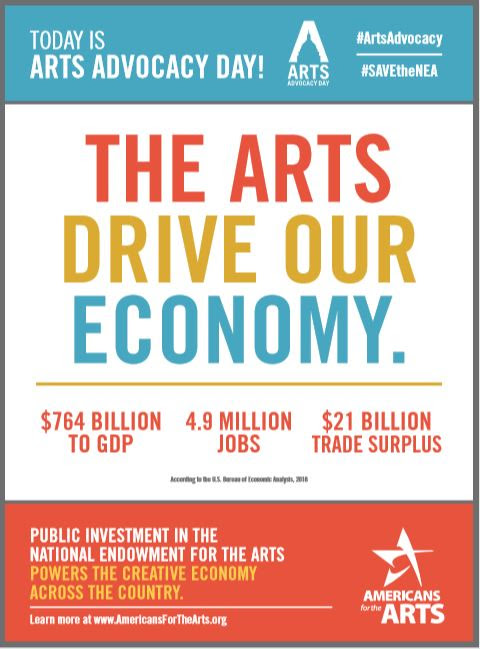 We have breaking news out of Washington, D.C. today. Congress has released their final funding plan for FY 2018, and it is great news!

This final budget is in stark contrast to a year ago, when the Endowments were facing a proposed termination by the President — the first ever! Since then, our #SAVEtheNEA campaign has together resulted in hundreds of thousands of calls, emails, local op-eds, expanded research, newspaper ads, and office visits.

Your advocacy, your persistence, and your time has made a difference. Congress has now decided to invest more funding into the arts.

This support from members of Congress in both parties is a testament that the arts are bipartisan.

NEA grant money is distributed to all 50 states and U.S. territories, and 65 percent of NEA grants goes to small and medium-sized organizations. More, over 40 percent of NEA-supported efforts are in high-poverty neighborhoods.

Communicating this important work has led to the third consecutive year of funding increases for the NEA. It is also the second time in a row that a Republican-led Congress has reversed a request from President Trump to cut our cultural agenciesâ€™ funding.

In fact, in the budget plan released today, none of our nationâ€™s arts and cultural agencies incurred a budget cut. All of them received funding increases for this year.

Whatâ€™s Next
Today and tomorrow, the House and Senate are expected to vote on this agreement, and the President is expected to sign it into law. This will bring a final close to FY 2018â€”a long and bumpy roller coaster ride, and delivered 5 months late.

Going forward, both Endowments received that same termination proposal in the new budget request for FY 2019. However, the year is already off to a great start. Last week, the co-chairs of the Congressional Arts Caucus, Reps. Louise Slaughter (D-NY) and Leonard Lance (R-NJ), led a bipartisan letter calling for â€œat least $155 millionâ€ in FY 2019.

For the fifth consecutive year, that annual â€œDear Colleagueâ€ letter has once again set a new record for the number of signaturesâ€”166 members of the U.S. House of Representatives signed this letter!

We are humbled and grateful, and also mindful that we will sorely miss the leadership over many decades of Rep. Louise Slaughter, who passed away on Friday, March 16. Rep. Slaughter set an example for us all about how to work hard for causes you believe in. We are all so grateful for her tremendous work on behalf of the arts and arts education. You can read Americans for the Artsâ€™ full statement here.

We are also thankful to the more than 650 arts advocates who were just in Washington, D.C. for the 31st annual Arts Advocacy Day on March 12-13 and made more than 300 office visits. Our strategy was to keep asking for $155 million. That has been the consensus ask of the arts and arts education field represented each year at Arts Advocacy Dayâ€”every year now for the past 6 years. Your work is not in vain. Advocacy works!

Keep the pressure on. Measured by just emails, advocates sent more than 194,300 #SAVEtheNEA campaign emails to Congress. Your work will be needed to ensure that the latest proposal from the Trump Administration in FY 2019 is again defeated this year. Thank you for being an arts advocate.