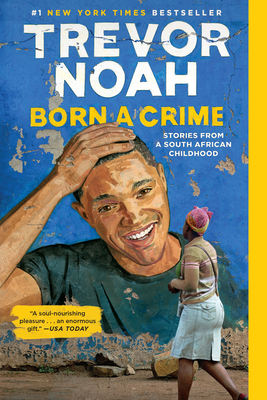 This Saturday, August 24, the Greensboro Public Library will kick off “One City, One Book,” a city-wide initiative to get Greensboro residents reading the same book: Trevor Noah’s Born A Crime: Stories from a South African Childhood.

The Kick-Off party happens at 6:30 pm at the Greensboro History Museum.

Osha Gray Davidson, author of The Best of Enemies: Race and Redemption in the New South, will lead a candid conversation about integration in places like Durham, where his book takes place, as well as the institutionalized racism experienced in places such as South Africa, which Noah writes about.

This fall, lively programs, discussions, films, theatrical productions, readings, and more will engage the entire community around the themes of Born a Crime.

Born a Crime is a New York Times international bestseller, named one of the best books of the year by USA Today, The San Francisco Chronicle, NPR, Esquire, Newsday, and Booklist.

Trevor Noahâ€™s unlikely path from apartheid South Africa to the desk of The Daily Show began with a criminal act: his birth. Trevor was born to a white Swiss father and a black Xhosa mother at a time when such a union was punishable by five years in prison. Living proof of his parentsâ€™ indiscretion, Trevor was kept mostly indoors for the earliest years of his life, bound by the extreme and often absurd measures his mother took to hide him from a government that could, at any moment, steal him away. Finally liberated by the end of South Africaâ€™s tyrannical white rule, Trevor and his mother set forth on a grand adventure, living openly and freely and embracing the opportunities won by a centuries-long struggle.

Filled with history of the Civil Rights Movement, The Best of Enemies: Race and Redemption in the New SouthÂ is an account of the unlikely friendship between Ann Atwater, an African American activist in Durham, and C. P. Ellis, a local member of the Ku Klux Klan. Both are engaged in the public school integration movement, just on opposite sides. Osha Gray Davison shares their backstories and takes the hidden history of Ann and C.P.â€™s story out of the darkness. The book has been made into a movie, starring Sam Rockwell and Taraji Henson.

Library staff are seeking the communityâ€™s help to convince Trevor Noah to make a public appearance in Greensboro for One City, One Book. The hope is that people will reach out on social media with the hashtag #TrevorToGPL.