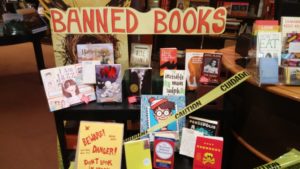 Each year, the ALA releases a list of the countryâ€™s top ten most challenged books. Despite all of the books having received various accolades, including Drama, recipient of the Stonewall Honor Award, five of the ten were challenged due to LGBT+ related content.

The representation of LGBT+ characters in books is of paramount importance to young children and teens. Being able to relate to a character creates confidence and security in being oneself. Reading about LGBT+ characters also helps children become more accepting of their peers. It makes little sense to ban books that can help young people feel better about themselves and feel more comfortable in society.

As for the other half of the books: four of ten were challenged due to sexually explicit content and/or offensive language, and one because it was written by Bill Cosby. Of course, school libraries need to ensure sexual content is age-appropriate; however, two of the books on the list are written for high-school and young adults/teens.

I read both Looking for Alaska by John Green and Eleanor and Park by Rainbow Rowell for leisure when I was a junior or senior in high school. Neither book was too graphic or offensive for me. In fact, the sexual scene in Greenâ€™s novel only alludes to the act. The offensive content in Rowellâ€™s novel comes from the abusive and impoverished home situation faced by one of the titular characters. If someone is offended by the reality of those harsh conditions, then maybe one should pay closer attention to the world around them: there are children who face the reality of that environment every day. Reading about characters like themselves might give young people the courage to speak up and help them feel less alone.

The censorship of books is an infringement on our rights as Americans. Banned Books Week aims to increase awareness and advocate for change. Most often banned books affect children in schools who are not able to stand up for themselves. It is our job to help them and protect their right to read.