The Squire Summer Writing Workshops kick off this week at Davidson College. Registrants in poetry, fiction, and creative nonfiction are gathering for the weekend and workshopping with faculty Jack Jung, Alan Michael Parker, and Cynthia Lewis. During the opening program last night in Alvarez College Union, registrants worked in groups to write their own interpretation of the North Carolina state toast:

Here’s to the land of the Long Leaf Pine

The Summer Land, where the sun doth shine;

Where the weak grow strong, and the strong grow great—

Here’s to “Down Home,” the Old North State!

The North Carolina Writers’ Network refers to North Carolina as “The Writingest State,” coined from Doris Betts who called North Carolina the writingest state and claimed that you can’t throw a rock without hitting a writer. It is with this vast literary community in mind that Squire registrants took to writing their own toasts. Some include:

Here’s to the words of old Caroline

Where the ink doth flow and the writers shine

Where poets sing and writers create

Here’s to the pens of the Writingest State!

*
Another group created a haiku: 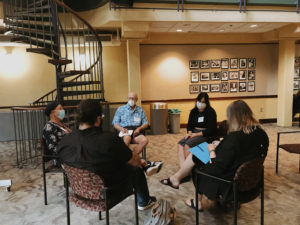