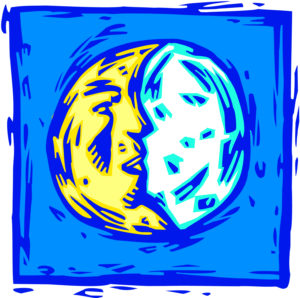 Welcome to the final installment of the “Prompt Party!” During The NCWN Writingest State Online Conference, Saturday, November 14, sponsored by Plottr, we randomly assigned a genre to rooms of randomly assigned attendees. Then, we gave a prompt:

Last week, we shared what was created by our fiction, newspaper article, and stage & screen rooms. Last but certainly not least, here’s what our poets came up with:

Where’s the Moon? I can’t see the Moon.
Eons ago, the moon was closer, larger.
She held water in her seas, in her caverns, in her arms.
The Moon was there to change me, and
the Moon was always there. But now Iâ€™ve been
in a human cave for so long.
If the moon isn’t here to change me, I am only a man.
The ancient blood moves through me,
rising and falling like the moon’s seas.

There are children out there.
I can hear them laughing in the hall. How
could I not, with these ears?
I could hear them laughing two towns over.
(Are they laughing at me now?)
I was a teacher once, and I loved the children. They
were kind, and eager to learn.
But now I only feel that
they smell so sweet. Sweet
and tasty, like a dessert.
Small children are delicious, I can remember now,
But, oh, so cruel as well.
I want to teach again, like I did after the French Revolution,
But I’m afraid to ask.
I want to be under the Moon again
But the night is also cruel.