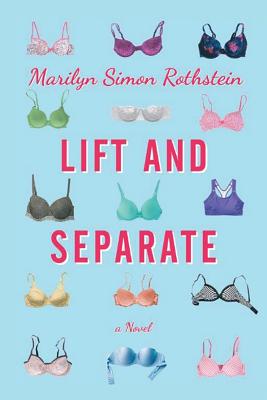 Every week through the end of December, Carolina Woman is giving away two free copies of the new novel Lift and Separate by Marilyn Simon Rothstein.

â€œLift And Separate is a laugh-out-loud, heartwarming story that begs to be a blockbuster starring Nicholson and Keaton and shares the vulnerability, wisdom, and brilliance of Nora Ephron’s Heartburn,â€ says Jennifer Belle, bestselling author of High Maintenance.

Marcy Hammer’s life has been turned upside down. Her husband, the head of a global brassiere empire, didn t think twice about leaving her after thirty-three years of marriage for a 32DD lingerie model. Now Harvey the Home-Wrecker is missing in action, but Marcy’s through thinking about what a cliche he is. What she needs now is a party-size bag of potato chips, a good support system, and a new dress.

Striking out on her own is difficult at first, but Marcy manages to find traces of humor in her heartbreak. Even while devastated by Harvey’s departure, she still has her indomitable spirit and her self-respect. She has no intention of falling apart, either, even when her adult children drop a few bombshells of their own and she discovers a secret about her new, once-in-a-lifetime friend. Life may be full of setbacks, but by lifting herself up by her own lacy straps, Marcy just may be able to handle them all.

For more than twenty-five years, Marilyn Simon Rothstein owned an advertising agency in Connecticut. She grew up in New York City, earned a degree in journalism from New York University, began her writing career at Seventeen magazine, and married a man she met in an elevator. Marilyn received a master of arts in liberal studies from Wesleyan University and a master of arts in Judaic studies from the University of Connecticut.

Established in 1993, Carolina Woman is the largest and longest-running women’s magazine in the Carolinas. Its readership includes 100,000 upscale, professional women in the high-tech Research Triangle area, a region covering Raleigh, Durham, Cary, and Chapel Hill, with a population of almost 2 million. They also sponsor a writing contest each Spring.