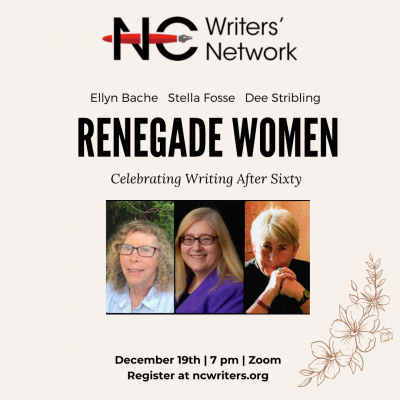 The author roundtable highlights NCWN members who are career writers, or who started writing later in life, in celebration that writing is for all ages and experiences. The authors will discuss craft, the writing journey, the gifts of getting older, and how writing informs their worlds.

Ellyn Bache grew up in Washington, DC, but has spent much of her adult life in the Carolinas.  Although she studied English at the University of North Carolina at Chapel Hill and at the University of Maryland, she turned to writing rather than teaching when she was homebound with the two oldest of her four children.  She began as a freelance newspaper journalist, publishing hundreds of articles  in The Washington Post, Baltimore Sun, Hagerstown (MD) Morning Herald, Greenville (SC) News, Chicago Tribune, and others over the years.  But her primary interest was always in fiction, and after several years of rejections while she taught herself the craft, her first short story appeared in McCall’s.  It was followed by others in a wide variety of commercial and literary magazines, ranging from Good Housekeeping and Seventeen to Shenandoah to the Carolina Quarterly. A collection of sixteen of her stories, The Value of Kindness, won the Willa Cather Fiction Prize. She is also the author of an online chapbook of five stories, Family Ties, published by Wordrunner echapbooks.

Ellyn’s family moved to Wilmington NC in 1985, where she completed her first novel, Safe Passage, about a family waiting to hear the fate of a son at the site of a terrorist bombing.  The novel was later made into a film starring Susan Sarandon and Sam Shepard.

Much of Ellyn’s work is set in the south.  Festival in Fire Season is about a destructive forest fire similar to one that devastated parts of Southeastern North Carolina in the late 1980s.  The Activist’s Daughter is about college life in North Carolina at the dawn of the civil rights movement.  Riggs Park and Daughters of the Sea are set partly on the Wilmington-area beaches.

Ellyn’s 2011 novel, The Art of Saying Goodbye, was selected as an “Okra Pick” (bookseller favorites from the Southern Independent Booksellers Alliance) and later as a SIBA Book of the Year Award nominee.

Stella Fosse (Jody Savage) is a former technical writer in biotechnology. In her sixties Jody switched to creating the books on her To Be Written list. So far these include a scientific memoir (The Year of the Mite), a book on writing (Aphrodite’s Pen: The Power of Writing Erotica After Midlife), and her debut novel at 68, Brilliant Charming Bastard. Jody wrote the first draft of a new book, Vampires of a Certain Age, during National Novel Writing Month in November. She teaches writing for Secure Senior Connections, and blogs under one of her pen names at www.stellafosse.com.

Dee Stribling is a poet focusing on culture and landscape. Her poems are tributes to friends and places embodying the strength, struggle, and beauty of rural and small town settings. A former Poet Laureate of Hillsborough NC, she is the author of several poetry chapbooks and is a two-time Sundress Academy for the Arts poetry winner. Her first full-length poetry collection Torn Screen Bent Frame is available from Hermit Feathers Press. She holds a Ph. D. from UNC-CH in Geography. Now retired, she was fortunate enough to work for SAS Software for over 30 years and enjoys speaking to the intersection of the arts and the corporate world. You can visit her via www.deestribling.com.